BOB GARFIELD is the cohost of public radio’s weekly Peabody Award-winning On the Media and has been a globally prominent media and advertising critic for three decades. He is also the founding cohost of Slate’s podcast on language, Lexicon Valley. Garfield has been a columnist or contributing editor for The Washington Post Magazine, The Guardian, and the op-ed page of USA Today. He has also written for The New York Times, Playboy, The Atlantic, Sports Illustrated, and Wired. He lives in the Washington, D.C., area. 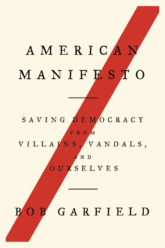