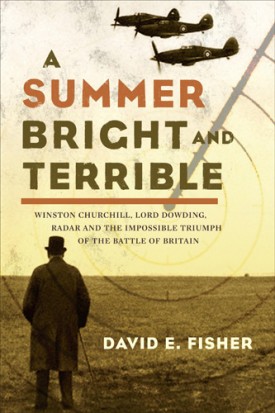 A Summer Bright and Terrible

Winston Churchill, Lord Dowding, Radar, and the Impossible Triumph of the Battle of Britain

Lord Hugh Dowding, Air Chief Marshall of the Royal Air Force, Head of Fighter Command, First Baron of Bentley Priory, lived in the grip of unseen spirits. In thrall of the supernatural, he talked to the ghosts of his dead pilots, proclaimed that Hitler was defeated only by the personal intervention of God, and believed in the existence of faeries. How could it be that such a man should be put in charge of evaluating technical developments for the British air ministry? Yet it was he who brought the modern multi–gunned fighter into existence. And he insisted that his scientists investigate the mysterious invisible rays that would prove to be the salvation of Britain: radar.

Dowding, who provided the organization and training that led to victory, has been all but ignored by U. S. biographers of Churchill and historians of the Battle of Britain. Yet his story is vital to tell, for its importance to the defense of Britain and the free world, and for the intriguing character study that emerges from his ongoing conflict with Churchill and the British government during the crisis years of the empire. Part military history, part science narrative, part biography; this an incredible story.

David E. Fisher is the author of twenty-three books, including A Race on the Edge of Time and Fire and Ice. He and his son Marshall John Fisher co-wrote three books--Tube, Strangers in the Night, and Mysteries of the Past. Fisher is currently a professor of cosmochemistry and environmental sciences at the University of Miami, and also teaches graduate courses in theories of war and peace, and the impact of science on history. He holds a Ph.D. in nuclear physics.