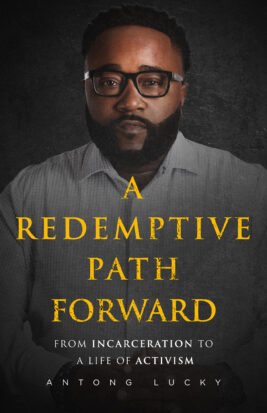 From Incarceration to a Life of Activism

The motivational memoir by a formerly incarcerated man who transformed from founder and leader of the Dallas Bloods to a practitioner of peace and nonviolence in the neighborhood he once helped destroy.

As a child of an incarcerated father, Antong Lucky grew up in an impoverished, crime-ridden neighborhood in East Dallas, Texas, born at the same time as East Dallas experienced an alarming rise in crack cocaine and heroin use. Despite his high grades and passion for learning, Antong is introduced to gang life and its consequences.

Eventually, Antong forms the Dallas Bloods gang, inaugurating a period in the 1990s of escalating retaliatory gun violence buoyed by a lucrative illegal drug enterprise until he is ultimately arrested and sentenced to seven years in prison. His journey through the doors of transformation came through the pain of incarceration and introspection that caused him to question the cognitive distortions embedded in him since childhood.

Once in prison, Antong denounced his gang affiliation and began working to unite rival gangs, quickly rising to become one of the most respected and sought-after mentors in prison. A spiritual transformation further inspired Antong to return to his old neighborhood after early release, seeking to align with like-minded people dedicated to challenging systemic issues in U.S. communities through collective efforts. The work of an incisive, determined mind, A Redemptive Path Forward will take its place among the broadening canon of titles championing and investigating prison abolition and societal transformation.

ANTONG LUCKY is an activist, advocate, and public speaker concentrating in the areas of mentoring Black men and boys, bridging the gap between community and police, and developing and launching violence reduction strategies, criminal justice reform, and reentry initiatives for formerly incarcerated people.