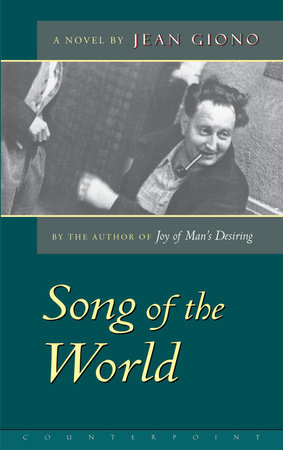 The Song of the World

Simple and magical, The Song of the World is an adventure story for the modern era when two men from France’s Provence region embark on a journey to discover the meaning of life.

Through writing which is invigorating and fresh, Giono re-presents man’s relationship to nature as the two men experience the wonders of the world. A tale of primitive love and vendetta set in the timeless French landscape of river, mountain and forest. Sailor, a woodsman, has twin sons, the elder of whom is dead and the younger, the red-head, has gone missing upcountry where the powerful landowner Maudru holds sway. With his friend Antonio, the riverman, he goes in search of the boy, fearing that he too has been killed. On the way they come upon a lone girl giving birth in the woods at dead of night, and they bring her to a place of safety. Once among Maudru’s drovers, who effectively serve him as a private army, they have to watch their step, the more so when they learn that the lost twin is in fact alive but the object of a ruthless manhunt, for he has married Maudru’s daughter against her father’s wishes, and is blamed, too, for the death of a nephew. With its taut yet elegiac atmosphere The Song of the World is unmistakably the work of a master storyteller.

Jean Giono was a French author who wrote works of fiction mostly set in the Provence region of France.