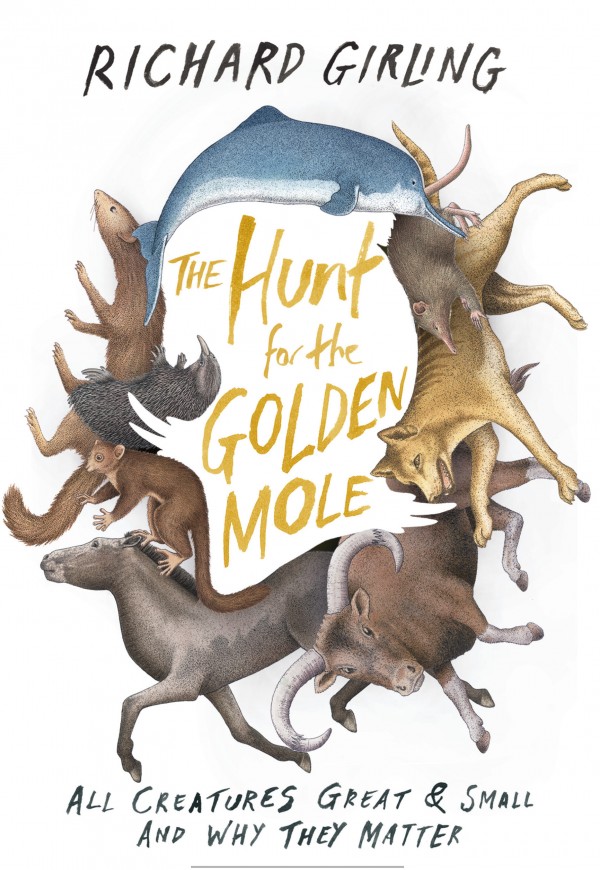 The Hunt for the Golden Mole

All Creatures Great & Small and Why They Matter

Taking as its narrative engine the hunt for an animal that is legendarily rare, Richard Girling writes an engaging and highly informative history of humankind’s interest in hunting and collecting – what prompts us to do this? what good might come of our need to catalog all the living things of the natural world?

Girling, named Environmental Journalist of the Years 2008 and 2009, has here chronicled – through the hunt for the Somali golden mole – the development of the conservation movement, the importance of diversity in the animal kingdom, including humankind within this realm, as well as a hard look at extinction.

The Somali mole of the title, first descibed in print in a text book published in 1964, had as sole evidence of its existence only the fragment of a jaw bone found in an owl pellet, a specimen that seemed to have vanished as Girling began his exploration. Intrigued by the elusiveness of this creature and what the hunt for the facts of its existence might tell us about extinction, he was drawn to the dusty vaults of museums of natural history where the most rare artifacts are stored and catalogued, as he found himself caught up in the need to track it down.

Part quest, part travelog, the book that results not only offers an important voice to the scientific debate about extinction and biodiversity it becomes an environmental call to arms.

Richard Girling is an award–winning environmental feature writer for The Sunday Times. In 2002 he was named Specialist Writer of the Year at the UK Press Awards and was short listed for the same award in 2005 and 2006. This is his first work of narrative nonfiction.

"Though Girling presents a sobering assessment of the state of the world's fauna, he does so with the dramatic flair of a novelist and eye for detail of a travel journalist. The result is a page–turning, thought–provoking treatise on a desperate environmental crisis." —Booklist, Starred

"The Hunt for the Golden Mole is...an informed and informative, provocative and rousing work. Exploring the startling changes in our attitudes to exotic and extraordinary animals over the past 200 years, and surveying the current scene – notably the mass slaughter of elephants in Africa, and such heroic projects as Edge of Existence, which works to protect endangered species – Girling brings passion to vital issues, and may help move at least a few readers to action." —The Telegraph

"This is a book that bursts into life from the first page. Part memoir, and part survey of a bewildering variety of animal species, Richard Girling's rousing, fascinating study takes the reader on a romp down the corridors of museums and zoos, into previous centuries and back again, and in and out of the lives of extraordinary and flamboyant characters: hunters, trappers, scientists and circusmen."— The Sunday Times

"The Hunt for the Golden Mole is an engaging story which illustrates the importance of every living creature, no matter how small, strange or rare. It is a thoughtful, shocking, inspiring and important book." —The Guardian

"That rarest of delights: a roaring book of huge importance written by a master storyteller exploring our fragile relationship with the animal kingdom, offering insights into how a hopeful future could yet be snatched from the jaws of despair. Not a hint of preaching, not a whiff of worthiness. A great story written not by an idealist but by a pragmatist with a heart of gold with a clear eyed view of the world." Sir Tim Smit

"I loved this book. This is natural history at its funniest, most curious, enlightening and heartfelt. I couldn't put it down. It was like going on safari with Gerald Durrell, Rachel Carson and Redmond O' Hanlon … I was alternately wide–eyed with wonder, appalled and then tickled to laughter. It's beautifully written. And it's powerful. An elegy to every living thing on this remarkable planet. Impossible to finish without being uplifted by the wonder of the natural world and driven to do something about its plight." Nicholas Crane
Don't miss news & events from Counterpoint Press.
Subscribe to the newsletter today.