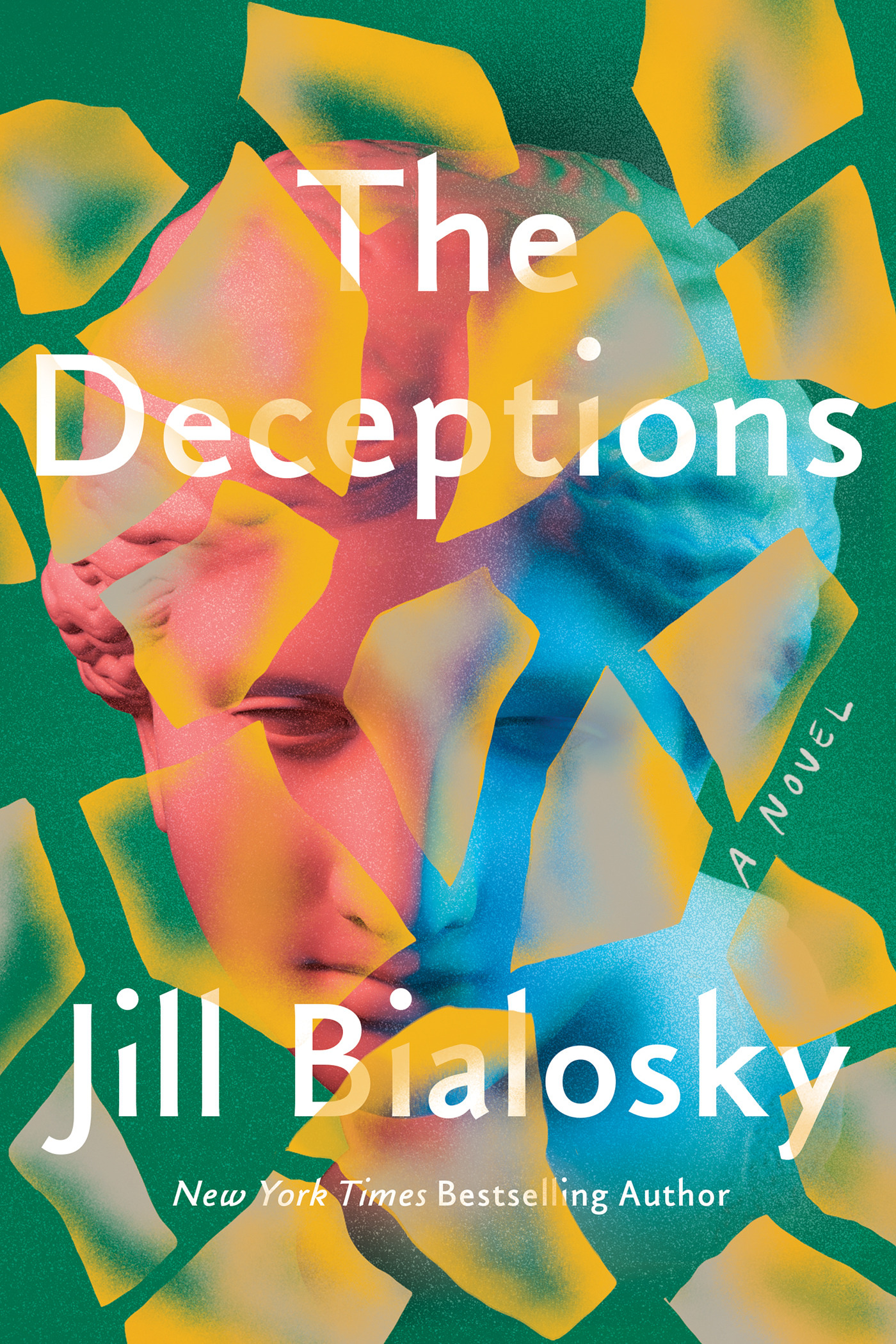 Something terrible has happened and I don’t know what to do. An unnamed narrator’s life is unraveling. Her only child has left home, and her twenty-year marriage is strained. Anticipation about her soon-to-be-released book of poetry looms. She seeks answers to the paradoxes of love, desire, and parenthood among the Greek and Roman gods at the Metropolitan Museum of Art. As she passes her days teaching at a boys’ prep school, spending her off-hours sequestered in the museum’s austere galleries, she is haunted by memories of a yearlong friendship with a colleague, a fellow poet struggling with his craft. As secret betrayals and deceptions come to light and rage threatens to overwhelm her, the pantheon of gods assume remarkably vivid lives of their own, forcing her to choose between reality and myth in an effort to free herself from the patriarchal constraints of the past and embrace a new vision for her future.

The Deceptions is a page-turning and seductively told exploration of female sexuality and ambition as well as a human drama that dares to test the stories we tell ourselves. It is also a brilliant investigation of a life caught between the dueling magnetic poles of privacy and its appropriation in art and literature. Celebrated poet, memoirist, and novelist Jill Bialosky has reached new and daring heights in her boldest work yet.

"Jill Bialosky wrote a real page-turner that weaves together love, desire, parenthood, and art. Trust me—The Deceptions is a book you won’t be able to put down. " —Katie Couric

"Bialosky urgently captures the moment in an adult's life when reflection leads to regret, and a desire to recapture the promise of one's youth becomes a kind of desperation. A vulnerable and searching tale of art, myth, and mortality." —Oprah Daily

"Throughout The Deceptions, the author is willing to confront nuance, more than one way of looking at something and the lies people tell themselves, as well as others. As is noted while contemplating one statue of Heracles, pathos is an important aspect of this novel. Emotions are both acknowledged and projected. The Deceptions is an engrossing, engaging novel . . . It is a novel that can stay with the reader for a very long time." —Daily Kos

“This clever writer was able to combine poetry, myth and betrayal, and I didn’t want this strange, dark story to end . . . It is a disturbing, but page-turning, tale.” —Claudia Sternbach, Lookout Santa Cruz

"There is nary a word out of place in The Deceptions, and there are long stretches of prose where nearly every sentence carries an almost electric charge . . . Superb." —The East Hampton Star

"We often pigeonhole people and their abilities: you’re a writer or an editor, a poet or a novelist, creative or strategic. My (admittedly anecdotal) experience suggests that such binaries are a fallacy, and Jill Bialosky is a distinctive example of how one can successfully juggle 'all of the above.' As Executive Editor of W.W. Norton, she shepherds talented writers through the publishing process; as a writer, she’s a poet, essayist and novelist; and as an interviewee, she’s tremendously thoughtful and engaged. The Deceptions reflects that sensitivity, examining both an individual’s complicated experience as an educator and writer, mother and wife. Most of all, the protagonist—like many of us—is seeking elusive concepts of success and love, and creating a fulfilling, and integrated self in a complex world." —Mandana Chaffa, Chicago Review of Books

"A complex exploration of consent and violation, sexuality and ambition . . . With the assured hand of a sculptor, Bialosky excavates the all-too-relatable dilemma of whether to face searing realities or bury ourselves in myth." —Ruth Madievsky, BOMB

"A poet as well as a novelist, Bialosky deftly balances these vast universal questions with tight descriptions of personal, arresting images. The result is a pressing, mesmerizing novel that explores the intense emotional journey of a writer, teacher, and mother grappling with the shifts in these identities in the aftermath of betrayal . . . [T]he photographs add to the immersive sense of the physical space. Even more, the narrator’s readings of these pieces of art are beautiful and made all the more so because we can follow along . . . Bialosky employs a subtle framework in the novel featuring the narrator’s book that pays off beautifully when this shapes the end of the story. Even without the promising literary framing, the novel is an unforgettable read . . . Bialosky elevates the ordinary with her exceptional attention to detail and her poignant observations." —Ceillie Clark-Keane, Ploughshares

"The writing is superb and specific while the character is real and interesting, which promises something worth finishing to the end. Bialosky has a way of inserting information in her text with such precision and authority that’s hard not to be admired while reading . . . Bialosky is a master of the craft and shows off her talents in this latest work. It is a story about deception in all forms, but it’s also about acceptance and forgiving yourself so there is room for hope." —Clarissa Chesanek, The Brooklyn Rail

"[Her] protagonist will fascinate any reader who has felt marginalized, belittled, and erased by the patriarchy . . . I can’t recommend this book enough."—Denise Duhamel, Best American Poetry (blog)

"Poetry and inspiration, obsession and divinity, all come under Bialosky’s purview in her elegantly constructed fable of trying to create while everything else falls apart." —Ed Simon, The Millions, A Most Anticipated Book of the Year

“The great Greeks—Odysseus, Herakles, Aphrodite, and, centrally, Leda and the Swan—circle around this powerfully written account of a woman in a kind of slow crisis and help her interrogate her marriage and desires. Then, in an extraordinary, explosive final act, a profound act of betrayal lifts the novel towards genuine tragedy. The Deceptions is a deeply felt and formally original tour-de-force.” —Salman Rushdie

“In The Deceptions Jill Bialosky captures the gutted hollow of the empty nest, the weight of marriage, and the ember of desire that is desperate for air. Bialosky explores the female artist’s need to take risks, to be seen and known, against her need for comfort, safety, and home. In stunning, finely tuned prose, Bialosky captures the music of marriage, the complexity of female ambition, sexual hunger, and rage. This story unfurls in a beautiful weave among objects from The Metropolitan Museum of Art. Myth, archetype, and history come to life and in the end we are returned to the present—this moment—and the question of what it is to be human, to risk, to fail, to suffer the pain of love.” —A.M. Homes

"At once classical and contemporary, Jill Bialosky's powerful new novel weaves together themes of art and life, sexuality and family, gender dynamics and selfhood. The Deceptions is urgent, unsettling, and utterly consuming—a triumph." —Claire Messud

“I was immediately swept away by this searing, elegant portrait of a woman in a place of psychological and emotional precarity. Jill Bialosky brings us with great delicacy and arresting sensuality into a world which becomes so real we cannot look away. The Deceptions is at once mesmerizing and masterful.” —Dani Shapiro, author of Inheritance

Praise for The Prize:

"The Prize is a graceful, quiet novel that finds its gravitational pull in the dissonance between the transcendence of art and the slog of everyday life. Bialosky has several books of poetry to her name, and her writing glows with insight . . ." —The New York Times Book Review

"Among the most resonant aspects of the novel is its deep understanding about the communicative nature of art." —David Ulin, Los Angeles Times

"This graceful novel balances the transcendence of art against the slog of everyday life." —The New York Times Sunday Book Review (Editor's Choice)

"This sharp–eyed novel of the art world follows the fortunes of a partner in a prestigious New York gallery who struggles with the memory of his brilliant but volatile father, the tempers of a high–maintenance artist and her competitive husband, the distress of a rocky marriage, and the temptation of extramarital adventure. The novel's characters are caught in predictable midlife crises—'Do you ever wake up and wonder how you got here?' one asks—but Bialosky deepens our sense of these troubles with well–chosen details, such as the protagonist's luxury–goods addiction. The plot is well crafted, carrying the reader to a surprising end." —The New Yorker

"The portrayal of an art world torn between crass commercialism and genuine expression is grippingly achieved. Ms. Bialosky is a book editor as well as a writer, and she knows something about the agonies and rewards of cajoling great work from basket–case artists. And when she describes the effect of paintings upon the senses (simply viewing Pierre Bonnard's 'Le Petit Déjeuner,' 'full of light and mystery,' causes the stress to drain from Edward's body), her own writing harnesses the agility and beauty the book so rapturously exalts." —Sam Sacks, The Wall Street Journal

"There is a Jamesian aspiration in this novel of bitter rivalries and thwarted passions, which hops between New York, Europe and Edward's home in Connecticut, where he lives with his disengaged wife and daughter" —Joanna Scutts, The Washington Post

"A poet, memoirist, and editor, Bialosky brings an insider's understanding of the complicated layers of being an artist today to this novel in which an art dealer is thrown off balance in the run–up to an awards competition, with ripples affecting his family, his future, and the artists he takes under his wing." —The Boston Globe