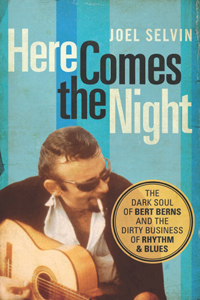 “I don’t know where he’s buried, but if I did I’d piss on his grave.” —Jerry Wexler, best friend and mentor

Here Comes the Night: Bert Berns and the Dirty Business of Rhythm and Blues is both a definitive account of the New York rhythm and blues world of the early ’60s, and the harrowing, ultimately tragic story of songwriter and record producer Bert Berns, whose meteoric career was fueled by his pending doom. His heart damaged by rheumatic fever as a youth, doctors told Berns he would not live to see twenty–one. Although his name is little remembered today, Berns worked alongside all the greats of the era—Jerry Leiber and Mike Stoller, Ahmet Ertegun and Jerry Wexler, Burt Bacharach, Phil Spector, Gerry Goffin and Carole King, anyone who was anyone in New York rhythm and blues. In seven quick years, he went from nobody to the top of the pops—producer of monumental R&B classics, songwriter of “Twist and Shout,” “My Girl Sloopy” and others.

His fury to succeed led Berns to use his Mafia associations to muscle Atlantic Records out of a partnership and intimidate new talents like Neil Diamond and Van Morrison he signed to his record label, only to drop dead of a long expected fatal heart attack, just when he was seeing his grandest plans and life’s ambitions frustrated and foiled.

Joel Selvin has been the San Francisco Chronicle's pop music critic for thirty six years. He is an award–winning journalist and best–selling author of 12 previous books, including Smartass: The Music Journalism of Joel Selvin, and Summer of Love: The Inside Story of LSD, Rock & Roll, Free Love and High Time in the Wild West.

"Selvin's tale...rights a historical injustice, shining a light on an overshadowed great man and deepening our understanding of a history we continue to dance to." —New York Times

"[a] compelling biography of a man who wrote and produced records in a fever. It's also an unvarnished account of the often–sordid world of East Coast music publishers, tunesmiths, record hustlers, label executives, gamblers, studio engineers, rack–jobbers, dee jays and leg breakers. This book belongs in the esteemed company of groundbreaking exposes [...] Selvin has told the story of a tortured soul of worthy of the Deems Taylor Award." —Downbeat Magazine

"Joel Selvin's new book makes a claim to greatness. In the world of glaringly and exhaustively over–examined star bios, the San Francisco–based journalist not only exhumes a lost soul in the pantheon of ‘60s pop and soul (along with capturing rock ‘n' roll's burgeoning eruption), he also creates as engaged and energetic a narrative as any so–called serious writing can contain." —Paste Magazine

"The author provides a vivid, character–filled picture of the wild west atmosphere of the New York music biz, often branching out into narrative detours that are consistently entertaining and enlightening" —Austin Chronicle

"Selvin has such great fun telling tales about off–kilter, unscrupulous record–biz
denizens [...] the book is both an informative history of a wild time in the music business and a compendium of acerbically delivered gossip" —Maclean's

"Berns is simply a hook for a larger history of the business of rhythm and blues in the 1960s. Here Comes the Night paints this milieu — unscrupulous businessmen shilling teenybopper hits" —Los Angeles Review of Books

"Here, Selvin chronicles in delicious detail the golden era of the early 1960s rhythm and blues music scene and the turbulent, hard–knuckle world of record–making behind the glitzy, gold foil façade of rock and roll success and glamor." —Cleveland Plain Dealer

"Here Comes the Night makes a strong case for Berns as the consummate record man, not just another white guy trolling to world of NYC independent R&B looking for a buck but a passionate believer in music.... Selvin takes a labyrinthine tale involving hundreds of characters and tames it... It's a classic a'60s music story as any. And Selvin tells it with period–appropriate style... In the 400–plus pages [...] Selvin also proves a shred salesman: by the end you'll have bought into the idea that Bert Berns, for all his flaws, was truly one of the great ones." —Mojo, four–star review

"Selvin makes the case that borderline–shady characters like Berns have always cast a big shadow over pop." —Rolling Stone, 3 and ½ stars out of 4

"Joel Selvin has written a book whose prose is so alive, it begs to be read out loud. Its subject matter is so thrilling, you feel the excitement of writing a great song, finding an artist for that song, and producing the song on your own label." —Goldmine Magazine

"A thrilling story of a little–known songwriter and record producer of some of the greatest rhythm and blues hits. Longtime San Francisco Chronicle music critic Selvin digs with gusto into the tasty history of New York City's hit–making songwriters, artists and record magnates of the great R&B era of the early 1960s, focusing on one of the greatest, if least sung of the bunch, Bert Berns … Selvin's prose, muscular and Runyon–esque and never taking itself too seriously, moves the narrative along from its upbeat start to its sordid denouement at the edges of New York's gangland. A fascinating time capsule of a free–wheeling era in American music and society." —Kirkus

"Again and again, Selvin brings forgotten recording sessions that any other chronicler would have ignored to such stirring life that they validate not only the story he has to tell but the worth of Berns's own life… Selvin lets you feel the contingency of the moment, how everything that happened—this inflection, that hesitation—could have turned out completely differently, and led to nothing." —The Believer (Greil Marcus)

"[Selvin] delivers an authoritative look at a crucial point in American popular culture… [T]he extraordinary discography of compositions and productions included here testifies to Berns' stature… if you grew up with the songs, you'll leave the book happily singing to yourself, though also saddened (this being the blues)." —Booklist

"Here Comes The Night purports to be the story of Bert Berns and it is certainly that –– plus the in–depth story of many other fascinating individuals, as well as a socio–economic history of a musical culture, and how Rhythm & Blues and Rock 'n' Roll changed the music business and indeed... the world. I couldn't put it down!" –– Mike Stoller of Leiber and Stoller
Don't miss news & events from Counterpoint Press.
Subscribe to the newsletter today.