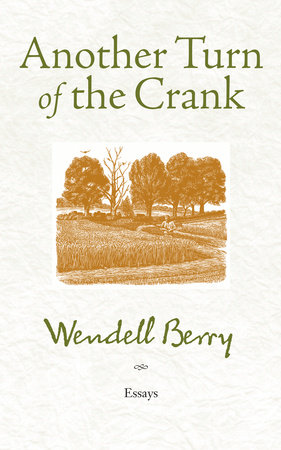 Another Turn of the Crank

“A Kentucky farmer and writer, and perhaps the great moral essayist of our day, Berry has produced one of his shortest but also most powerful volumes.” —The New York Review of Books

From modern health care to the practice of forestry, from local focus to national resolve, Wendell Berry argues, there can never be a separation between global ecosystems and human communities—the two are intricately connected, and the health and survival of one depends upon the other.

Provocative, intimate, and thoughtful, Another Turn of the Crank reaches to the heart of Berry’s concern and vision for the future, for America and for the world.

“The rarest (and highest) of literary classes consist of that small group of authors who are absolutely inimitable . . . One of the half–dozen living American authors who belongs in this class is Wendell Berry.” —Los Angeles Times

“Berry is a philosopher, poet, novelist, and an essayist in the tradition of Emerson and Thoreau . . . like Thoreau, he marches to a different drummer, a drummer we would do well to be aware of, if not to march to.” —San Francisco Chronicle