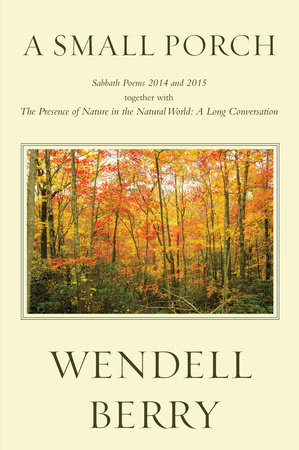 More than thirty–five years ago, Wendell Berry began spending his sabbaths outdoors, when the weather allowed, walking and wandering around familiar territory, seeking a deep intimacy only time could provide. These walks sometimes yielded poems. Each year since, he has completed a series of these poems dated by the year of its composition.

This new sequence provides a virtual syllabus for all of Berry’s cultural and agricultural work in concentrated form. Many of these poems—including a sequence at mid–year of 2014—were written on a small porch in the woods, a place of stillness and reflection, a vantage point “of the one / life of the forest composed / of uncountable lives in countless / years, each life coherent itself within / the coherence, the great composure, of all.”

Recently Berry has been reflecting on more than a half century of reading, to discover and to delight in the poetical, spiritual, and cultural roots of his work. In The Presence of Nature in the Natural World, Berry’s survey begins with Alan of Lille’s twelfth–century work, The Plaint of Nature. From the Bible through Chaucer, from Milton to Pope, from Wordsworth to the moderns, Berry’s close reading is exhilarating. Moving from the canon of poetry to the sayings and texts found in agriculture and science, closely presented, we gain new appreciation for the complexity of the issues faced in the twenty–first century by the struggling community of humans on earth.

With this long essay appended to these new Sabbath Poems, the result is an unusual book of depth and engagement. A new collection of Wendell Berry poems is always an occasion for celebration, and this eccentric gathering is especially so.

"[Berry's] essays, poetry and fiction have fertilized a crop of great solace in my life, and helped to breed a healthy flock of good manners, to boot. As I travel this unlikely road of opportunity, as a woodworker and writer, sure, but most often as a jackass, I have his writings upon which to fix my mind and my heart, to keep my life's errant wagon between the ditches, as it were. Mr. Berry's sentences and stories deliver a great payload of edifying entertainment, which I hungrily consume, but it is the bass note of morality thumping through his musical phrases that guides me with the most constant of hands upon my plow."
—Nick Offerman, New York Times bestselling author of Paddle Your Own Canoe

"Thoreau would be gratified . . . Here are Sabbath Poems that praise the given life."
—Lexington Herald–Leader

"[Berry's poems] shine with a gentle wisdom of a craftsman who has thought deeply about the paradoxical strangeness and wonder of life."
—The Christian Science Monitor

"Wendell Berry is one of those rare individuals who speaks to us always of responsibility, of the individual cultivation of an active and aware participation in the arts of life, be they those of composing a poem, preparing a hill for planting, raising a family, working for the good of oneself and one's neighbors, loving."
—The Bloomsbury Review

"Berry's craftsmanship remains impeccable. Few other poets have such chaste and precise diction or manage line and stanza with such unaffected serenity."
—Booklist
Don't miss news & events from Counterpoint Press.
Subscribe to the newsletter today.