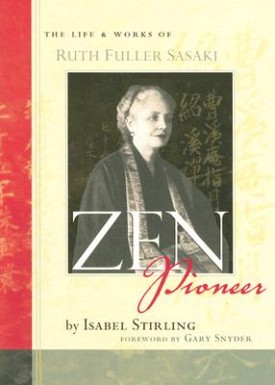 Ruth Fuller Sasaki, who died in 1967, was a pivotal figure in the emergence and development of Zen Buddhism in the United States. She is the only Westerner–and the only woman–to be made a priest of a Daitoku-ji temple and was mentor to Burton Watson, Philip Yampolsky, and Gary Snyder, and mother-in-law of Alan Watts. This is the first biography of her remarkable life.

Few devoted their lives to Zen Buddhism as Ruth Fuller did. As a senior student of Sokei-an Sasaki in New York, Ruth helped him develop the infrastructure of what would eventually become The First Zen Institute in New York City. She married Sasaki in 1944, and it was her mission to maintain The First Zen Institute and later, to establish The First Zen Institute of America in Japan. Her legacy remains today in the Zen facilities she helped build in New York and abroad and in the many texts she saw through translation, published from the 1950s to the 1970s. For the first time in book form, three of her writings are included here–Zen: A Religion, Zen: A Method for Religious Awakening, and Rinzai Zen Study for Foreigners in Japan.
About The Authors

Gary Snyder is the author of sixteen collections of poetry and prose. Since 1970 he has lived in the watershed of the South Yuba River in the foothills of the Sierra Nevada. Winner of the Pulitzer Prize in 1975 and a finalist for the National Book Award in 1992, he has been awarded the Bollingen Poetry Prize and the Robert Kirsch Lifetime Achievement Award.