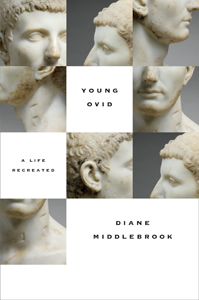 After writing two extremely well received biographies—the first about Anne Sexton and the second about poets Ted Hughes and Sylvia Plath—world–renowned scholar Diane Middlebrook’s final project was a study of Ovid’s work. Though he has been dead for over two thousand years and had left no personal records—not even the name of his mother—his poetry endures. Middlebrook was convinced that her intimate knowledge of Ovid’s poetry and the approach she used in Her Husband (winner of the Prix Du Meilleur Livre Estranger), combined with a deep immersion into the Rome of Ovid’s time, would enable her to write what could, without bragging, be called an Ovidian biography.

However, severe health issues interfered with Middlebrook’s work, and she was ultimately unable to complete this ambitious project before her death in 2007. She left behind an extraordinary look at the conditions and customs to which Ovid was exposed as a young Roman, as well as an acute interpretation of his family and personal life, gleaned from close readings of his poetry and letters from exile. Exhaustively researched and carefully constructed, Middelbrook’s portrayal of Ovid is certain to be studied by scholars and read by historians for year to come.

Diane Middlebrook was an American biographer, poet, and teacher. She taught feminist studies for many years at Stanford University. She is best known for New York Times Bestseller Anne Sexton: A Biography, the critically acclaimed Her Husband: Ted Hughes & Sylvia Plath, A Marriage, and Suits Me: The Double Life of Billy Tipton.

Diane Middlebrook was an American biographer, poet, and teacher. She taught feminist studies for many years at Stanford University. She is best known for New York Times Bestseller Anne Sexton: A Biography, the critically acclaimed Her Husband: Ted Hughes & Sylvia Plath, A Marriage, and Suits Me: The Double Life of Billy Tipton.

Praise
"Middlebrook's book itself is an example of life's sudden and painful transformations....All three parts: the tales of life in ancient Rome, the sections on Ovid's poetry, and the fiction, are engaging." —Washington Free Beacon

"With no historical evidence for the particulars of Ovid's life, [Diane} Middlebrook relies on histories of society, politics and culture in ancient Rome, as well as the poet's writings, to draw intriguing inferences about his experiences, personality and especially his motivation to become a poet instead of a magistrate, as his father intended.. . .In this inventive, hybrid biography, Middlebrook grounds Ovid's poetry in an insightful reconstruction of his life." —Kirkus Reviews

"Middlebrook (Anne Sexton) died before she could complete this biography of the Roman poet Ovid, but what she did finish is certainly of great value. . . .Middlebrook's well–researched work provides insights into the diverse elements of Roman life, from horses to education, and even divorce. But Middlebrook is most persuasive when she interprets how Ovid came to write his masterpieces. . ." —Publishers Weekly

Praise for Anne Sexton: A Biography

"A wonderful book, just, balanced, insightful, complex in its sympathies and in its judgment of Sexton both as a person and as a writer . . . a deeply moving account." —The New York Times Book Review

"Judicious and canny. [Middlebrook] appreciates both Sexton's gifts as a poet and her attractive side as a human being...but looks at her destructive weaknesses with a steady eye." —Time

"In this rich and enthralling biography of American confessional poet Sexton, Middlebrook (English, Stanford) approaches Sexton's life and work with a masterful balance of objectivity and empathy." —Library Journal

Praise for Her Husband: Ted Hughes & Sylvia Plath, A Marriage

"A deep, rich, and satisfying biography of a marriage—harrowing and ironic, playful and grave." —The Washington Post Book World

Praise for Suits Me: The Double Life of Billy Tipton

"The sensitive storytelling reveals thought–provoking perspectives about gender and the traditional American family, while capturing the social history of traveling jazz bands for 40 years." —Library Journal

"Always scintillating, Middlebrook vividly describes the jazz scene Tipton reveled in and captures the energy and the enigma of Tipton's brilliant if confounding improvisational life." —Booklist