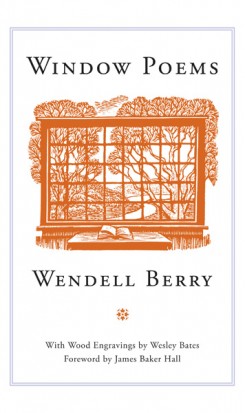 Composed while Wendell Berry looked out the multipaned window of his writing studio, this early sequence of poems contemplates Berry’s personal life as much as it ponders the seasons he witnessed through the window. First designed and printed on a Washington hand press by Bob Barris at the Press on Scroll Road, Window Poems includes elegant wood engravings by Wesley Bates that complement the reflective and meditative beauty of Berry’s poems.

Praise
"In the corner of the forty-paned window at the Camp, feeding from a roofed flat, the nuthatches, chickadees, sparrows, bluejays, cardinals flew in and grabbed something up and flew off, and the poems did and keep doing likewise, hunting for what to trust. All taken together they sound like what they do, not what they say: the author is throwing the dice, the stakes are high: his long writs are loose, he's on a roll." -- James Baker Hall