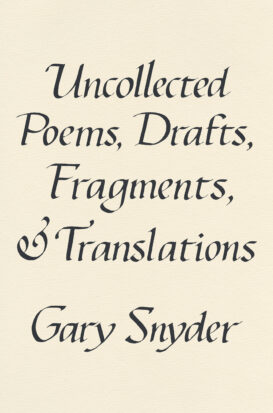 A collection of previously uncollected and unpublished works by a Pulitzer Prize-winning Beat poet Gary Snyder, written during his most productive and important years

Far from being a simple miscellany of poems, Uncollected Poems, Drafts, Fragments, and Translations contains some of Gary Snyder’s best work, written during his most productive and important years.

Many of these have been published in magazines or as broadsides, including Spel Against Demons, Dear Mr. President, Hymn to the Goddess San Francisco, Smokey the Bear Sutra, A Curse on the Men in Washington, Pentagon. The collection also includes a great number of translations from Chinese and Japanese poets. Much of this work has been gleaned from journals, manuscripts and correspondence, and never before published in any form.