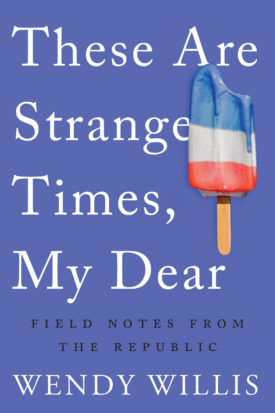 These Are Strange Times, My Dear

Field Notes from the Republic

In these pointed and wide-ranging essays, Wendy Willis explores everything from personal resistance to the rise of political podcasts, civic loneliness to the exploitation of personal data, public outrage to the opioid crisis–all with a poet’s gift for finding the sacred in the mundane, a hope in the dark.

One of the country’s sharpest observers of politics, art, and the American spirit, Willis returns often to the demanding question posed by Czech writer, activist, and politician Václav Havel: What does it mean to live in truth? Her view is honed by her place as a poet, as a mother, and, when necessary, as an activist. Together, the essays in These Are Strange Times, My Dear work within that largely unmapped place where the heartbreaks and uncertainties of one’s inner life brush up against the cruelties and responsibilities of politics and government and our daily lives.
About Wendy Willis

WENDY WILLIS is a writer living in Portland, Oregon. Winner of the Dorothy Brunsman Poetry Prize, she has published two books of poetry and in journals, including New England Review, Oregon Humanities, Poetry Northwest, The Rumpus, Zócalo Public Square, and ZYZZYVA. Willis is a lawyer, the executive director of the Deliberative Democracy Consortium, and the founder and director of Oregon's Kitchen Table.

Praise
Praise for These Are Strange Times, My Dear

"A self-described 'evangelist of the word, ' lawyer and poet Willis dives deep in this collection of essays. Where else might one find mention of Thomas Jefferson and Harvey Weinstein (though not in the same essay)? . . . Indeed, in all of the essays, Willis offers a fresh perspective on many cultural tropes . . . For those who want to share a deeper experience of life, with all its loneliness and fragility, Willis is an apt companion." --Booklist "Offers a unique vision for life in such challenging times . . . Willis's nuanced and interior approach to politics is a welcome departure from the harsh rhetoric so popular today. Even readers who disagree with her will appreciate her sincerity and experiences as a mother, lawyer, and author." --Library Journal "Her best essays combine rigor with sensory observation, ranging widely among varied interests . . . A compassionate, measured voice that serves as an antidote to strident pontificating." --Kirkus Reviews


"[An] impassioned, wry perspective informs these essays, which sit at the intersection between the political and the personal. They're striking for their candor and willingness to consider complexity, whether she's pondering public protest or private sorrows." --Amy Wang, The Oregonian

Praise for A Long Late Pledge Winner of the 2017 Dorothy Brunsman Poetry Prize "Willis creates an argument in favor of embracing the contradictions of contemporary America, and of recommitting to a new, messy, and self-aware patriotism in search of the ideals of democracy. These poems affirm that the political is personal, and that dissent, reengagement with democratic ideals, recognition of complexity, and a capacity for humor are all valuable when stitching together the flag of perfect imperfection." --Edward Derby, The Rumpus Praise for Blood Sisters of the Republic "With a voice as uptown as it is down-home, Wendy Willis' splendid poems make one astonishing yet satisfying leap after another. Each line is chock-a-block with a jazzy, jostling sound all her own. This poet '. . . stands and keens / her tunneled silence, a burr in the mouth, smooth as oil . . .' The width and depth of her embrace is remarkable, her vision as fearless as her full-tilt music." --Paulann Petersen, Oregon Poet Laureate and author of The Voluptuary "Wendy Willis is a poet of serious heart, a fact of enormous importance to the political and personal terms of her first book. While her politics lie in a generosity of spirit, her affections border on the extravagant. There is something wonderfully wild at the center of her poems, a freedom earned by craft. Blood Sisters of the Republic is as much about its local life as it is about national conscience. Plentitude and complexity are the hallmarks of its voice. And love is its signature." --Stanley Plumly, author of Old Heart "'I was born under the sign of the pulp mill, ' writes Wendy Willis at the opening of this startlingly acrobatic collection. In poems that sing of a lineage 'maimed by plainness, ' her republic of bruised plums, sourdough starts, and black-capped chickadees is as ravaged as it is irresistible. It's a crowded, complicated, and often comical Republic. Her writing is like no one's I know. Her book is a homage to the exquisite madness of real life." --David Keplinger, author of The Prayers of Others "Here's a full-out 21st century poet--wrangler with history, domestic confidante, disrupter of narratives, down-home storyteller, linguistic fire breather. Wendy Willis fills this striking book to bursting with the rich matter of home life and the world's grand, baffling sweep." --Greg Glazner, author of Opening the World "What is this creature Wendy Willis calls Blood Sisters of the Republic? Let me offer a few excited observations: a compendium, an almanac, a miscellany. A genealogy both personal and broadly American. An investigation of loss. A lush, lyrical hymn to maddening and beloved communities that define us. Willis deftly inhabits a tremendous number of drives--the lyrically sensual, the intimately epistolary, the historiographic--but most central to the spirit of this stunning first collection is the drive to pay unceasing attention to the ruined and tender world. Blood Sisters of the Republic explodes all well-behaved notions of what a collection of poetry might contain, insisting on a vaster and more civic notion of the art form." --Lia Purpura, author of King Baby, and the winner of the 2008 Beatrice Hawley Award "If a homesteader deep in the land grew poems, they would inhabit this book. If the wrangling urge of a bean seed in dark earth to split and lunge up-stem and delve down-root at once, they would be these incantations Willis has offered homegrown, tart as a wild blackberry, nutritious as wheat. Her way with words is resident and feral in one go, inventing lyric chants that feel by turns old, festive, settled, searing--and original, from the origin point of the human. It's as if a shaman disguised as the cathedral janitor told her to write without fear, tell her most secret and arresting stories, and she did." --Kim Stafford, author of 100 Tricks Every Boy Can Do: How My Brother Disappeared