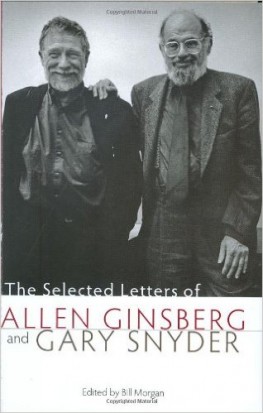 The Selected Letters of Allen Ginsberg and Gary Snyder

One of the central relationships in the Beat scene was the long-lasting friendship of Allen Ginsberg and Gary Snyder. Ginsberg introduced Snyder to the East Coast Beat writers, including Jack Kerouac, while Snyder himself became the model for the serious poet that Ginsberg so wanted to become. Snyder encouraged Ginsberg to explore the beauty of the West Coast and, even more lastingly, introduced Ginsberg to Buddhism, the subject of so many long letter exchanges between them.

Beginning in 1956 and continuing through 1995, the two men exchanged more than 850 letters. Bill Morgan, Ginsberg’s biographer and an important editor of his papers, has selected the most significant correspondence from this long friendship. The letters themselves paint the biographical and poetic portraits of two of America’s most important — and most fascinating — poets.
About The Authors

Gary Snyder is the author of sixteen collections of poetry and prose. Since 1970 he has lived in the watershed of the South Yuba River in the foothills of the Sierra Nevada. Winner of the Pulitzer Prize in 1975 and a finalist for the National Book Award in 1992, he has been awarded the Bollingen Poetry Prize and the Robert Kirsch Lifetime Achievement Award.

"To read their letters . . . is to overhear the evolution of a remarkable friendship and the birth of a literary flowering we know as the Beat movement." --San Francisco Chronicle "Allen Ginsberg was the poet laureate of the Beat Generation . . . As much through the strength of his own irrepressible personality as through his poetry, Mr. Ginsberg provided a bridge between the Underground and the Transcendental." --New York Times "Reading [Snyder], you encounter a massive, assimilating intelligence, with a startling command of natural and human history." --New Yorker