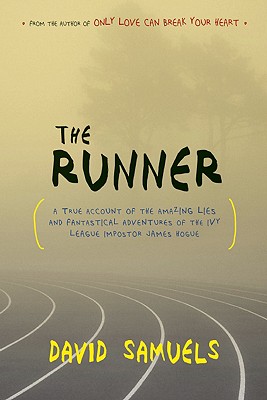 The Runner tells the remarkable true story of a teenage drifter and petty thief named James Hogue who woke up one cold winter morning in a storage shed in Utah and decided to start his life anew. Re–imagining himself as a self–educated ranch hand named Alexi Indris–Santana who read Plato under the stars and could run a mile in under four minutes, Hogue applied and was accepted to Princeton University, where he excelled academically, made the track team, and became a member of the elite Ivy Club.

Echoing both The Great Gatsby and The Talented Mr. Ripley, the story of Hogue’s life before and after he went to Princeton is both an immensely affecting portrait of a dreamer and a striking indictment of the Ivy League “meritocracy” to which Hogue wanted so badly to belong. Drawing elegant parallels between Hogue’s ambitions and the American myth of self–invention, while also examining his own uneasy identification with his troubled subject, David Samuels has fashioned a powerful metaphor for the corruptions of the American dream, revealing exceptional gifts as a reporter and literary stylist.

David Samuels, a contributing editor at Harper's magazine and a longtime contributor to The Atlantic and The New Yorker, is the author of Only Love Can Break Your Heart and The Runner. He is the literary editor of Tablet Magazine.

Praise
"Hogue, for all his deceptions, was genuinely an elite runner . . . and Samuels is an elite narrative journalist, a master at teasing out the social and moral implications of the smallest small talk, of the way people turn their heads or slide into non sequitur as they try to explain themselves." —Keith Gessen, The New York Times Book Review

"Haunting . . . Samuels succeeds in showing a man who's not really sure if he even exists." —Richard Rayner, Los Angeles Times