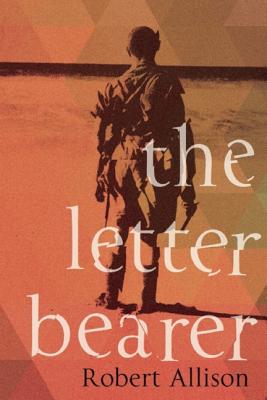 The Rider has no memory of who he is, where he is, or how he came to be lying—dying— in the brutal heat of the North African desert. Rescued by a band of deserters, the Rider begins to piece together his identity, based on shards of recollection and the letters in his mailbag. The Letter Bearer is unlike any other novel of World War Two. In the midst of profound trauma, terrible warfare, and the nameless experience of desertion, this gripping story asks us to consider how men build hope when they have nothing left—not even a name.

When first published last year in London, Robert Allison’s debut novel was met with wide praise and was nominated for the Desmond Elliott Prize, described by one of its judges as “‘An excellent and elegant novel written with patience and authority . . .” Readers of Michael Ondaatje and Paul Bowles will find the landscape familiar, but no reader will ever forget the haunting and haunted story of this remarkable victim.

Robert Allison has been a theatre director, a film and music reviewer and a copy-editor. He lives in London.

Praise
"Daringly, debut novelist Allison makes the story all his own....Allison's tale has an almost hypnotic inevitability that unfolds as the rider shifts his viewpoint from unknown past to an unknowable future in which "I shall become everything expected of me." Elegantly and exactingly written. A touch ponderous at times but oddly—beg pardon—unforgettable."—Kirkus, Starred Review

"This is a tremendous second world war novel. With thickets of intense, opaque prose and some striking, hallucinatory descriptions of the desert... Allison writes powerfully – often thrillingly – about the nitty–gritty of conflict. A finely crafted debut." —Financial Times

"Allison's debut is a beautifully written investigation into alienation, guilt and the will to survive. The desert is a character itself, brilliantly alive and vividly depicted. This is a gripping exploration of one man's travails – and through him, those of millions other men trapped in the terrible mechanism of war." —Independent

"The novel is insightful in its development of character and the interaction of the small group of fellow–travellers amongst whom the Rider finds himself."—Historical Novel Society

"One of those rare novels that merits a second reading." —Paul Bailey

"Infused with the head and dust of the North African desert, this is a haunting, lyrical novel that hovers in the mind like a glittering mirage, long after it has finished." —Roma Tearne