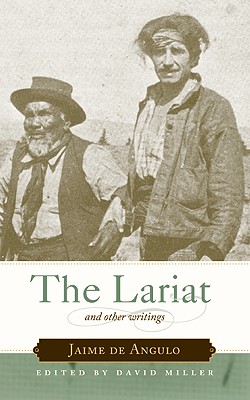 One of the most colorful and captivating writers of the 20th century, Jaime de Angulo came to America to become a cowboy, not an author. And he did become a cowboy—and a doctor, and a psychologist, and a highly regarded anthropologist. However, it was as a writer that he ultimately found his true calling. His stories uniquely represented the bohemian sensibility of the time, and he was known for infusing intellectualism into his coyote tales and shamanic mysticism. So vivid were his tales that Ezra Pound called him “the American Ovid,” and William Carlos Williams claimed that de Angulo was “one of the most outstanding writers that I have ever encountered.”

The Lariat, which may well be his most important piece of fiction, is highlighted in this prize collection, along with other writings that have long been unavailable.

Jaime de Angulo was a cowboy, cattle rancher, medical doctor, and linguist. A friend and colleague of Ezra Pound, Robinson Jeffers, and Harry Partch, de Angulo is the author of many books. He died in 1950.

"One of the most outstanding writers that I have ever encountered." —William Carlos Williams

"It is no effort, of course, to be pleased by the sure touch–stories and animal drawings that are poetry, innate, humor–born, and wise." —Marianne Moore