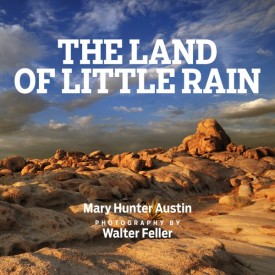 The Land of Little Rain

With photographs by Walter Feller

Mary Austin’s Land of Little Rain, first published in 1903, is considered by many to be one of the foundational texts in environmental writing, now studied as a classic in the literature that sought to describe the complexity of the American continent. Like John Muir, who wrote so intimately of the High Sierra that vast acreages have been preserved through the knowledge he shared, the work of Mary Austin has allowed those who will never travel there a deep feeling for the special beauties of the Southwest. Her poetic sensibility expressed in an inimitable prose paint a timeless portrait of that vast dry expanse, the Mojave northward from the Mexican border to Death Valley, with the Eastern Sierra to the west and the Colorado River to the east.

This new large format edition includes all of the original text together with the intimate color work of noted photographer Walter Feller, a lifelong admirer of Austin’s writing. He has spent years photographing the American Southwest, bringing to life the region’s vital landscape and wildlife in images of astonishing beauty.

Mary Austin (1868-1934) was born in Illinois. She later moved to California, where she gathered much of the background for her writings. Naturalist, essayist, feminist, and devoted opponent of commercial development, Austin wrote thirty-two books and more than two hundred essays in her lifetime, including Isidro (1905) and The Ford (1917). In 1925 she moved to Santa Fe, New Mexico, where she lived in an adobe home until her death.

Walter Feller is a California based nature and wildlife photographer. Since 1996, Feller's work has focused on documenting the natural history of the Mojave Desert.