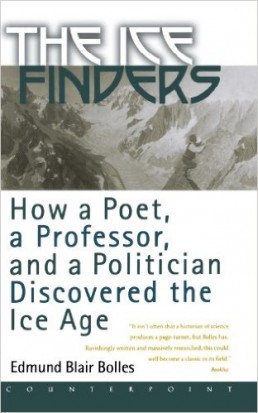 How a Poet, a Professor, and a Politician Discovered the Ice Age (Revised)

This is the story of three ambitious men and how their clash of egos, ignorance, and imaginations led to the discovery of the Ice Age. Louis Agassiz, extraordinary Swiss scientist and professor, conceived of the Ice Age and then spent decades trying to persuade other scientists he had not gone mad. Charles Lyell was his century’s most influential geologist and a master politician among his fellow scientists. His scientific principles said an Ice Age was impossible, even after his eyes showed him it was real. Elisha Kent Kane, an adventurer, trapped for two winters at the top of Greenland, wrote a poetic description of a harsh and frozen landscape. His reports portrayed previously unimaginable great ice and set the stage for the story’s unexpected outcome. The discovery of the Ice Age is one of sciences greatest and least-known stories. Like James Watson’s The Double Helix and Dava Sobel’s Longitude, The Ice Finders shows that, for all their boasting about reason, scientists are driven by their passions and obsessions – human traits that actually advance the evolution of scientific discovery.

Edmund Blair Bolles is a former Peace Corps teacher who grew up in Washington, D.C., Paris, France, and Toledo, Ohio. His undergraduate degree is from Washington University in St. Louis, and he has a Masters in English from the University of Pennsylvania. He lives in New York City.