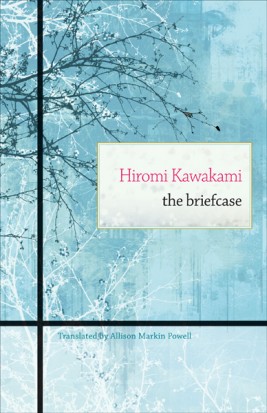 Tsukiko, thirty-eight, works in an office and lives alone. One night, she happens to meet one of her former high school teachers, “Sensei” in a local bar. Tsukiko had only ever called him “Sensei” (“Teacher”). He is thirty years her senior, retired, and presumably a widower. Their relationship-traced by Kawakami’s gentle hints at the changing seasons-develops from a perfunctory acknowledgment of each other as they eat and drink alone at the bar, to an enjoyable sense of companionship, and finally into a deeply sentimental love affair.

As Tsukiko and Sensei grow to know and love one another, time’s passing comes across through the seasons and the food and beverages they consume together. From warm sake to chilled beer, from the buds on the trees to the blooming of the cherry blossoms, the reader is enveloped by a keen sense of pathos and both characters’ keen loneliness.
About The Authors

Allison Markin Powell is a literary translator and editor in New York City. She has translated works by Osamu Dazai, Kaho Nakayama, and Motoyuki Shibata, and she was the guest editor for Words Without Borders, Japan issue.

Praise for The Briefcase "I'm hooked on The Briefcase, a sentimental novel about the friendship, formed over late nights at a sake bar, between a Tokyo woman in her late thirties and her old high school teacher... I can only imagine what wizardry must have gone into Allison Markin Powell's translation."--Lorin Stein, The Paris Review Daily "A dream-like spell of a novel, full of humour, sadness, warmth and tremendous subtlety. I read this in one sitting and I think it will haunt me for a long time." --Amy Sackville "In quiet, nature-infused prose that stresses both characters' solitude, Kawakami subtly captures the cyclic patterns of loneliness while weighing the definition of love."--Booklist