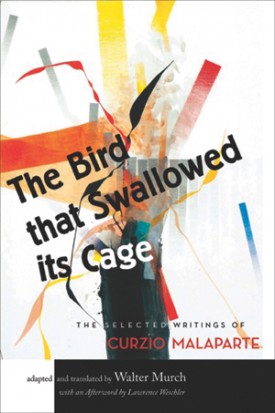 The Bird that Swallowed Its Cage

The Selected Writings of Curzio Malaparte

Walter Murch first came across Curzio Malaparte’s writings in a chance encounter in a French book about cosmology, where one of Malaparte’s stories was retold to illustrate a point about conditions shortly after the creation of the universe. Murch was so taken by the strange, utterly captivating imagery he went to find the book from which the story was taken. The book was Kaputt, Malaparte’s autobiographical novel about the frontlines of World War II.

Curzio Malaparte, an Italian born with a German heritage, was a journalist, dramatic, novelist and diplomat. When he wrote a book attacking totalitarianism and Hitler’s reign, Mussolini, in no position to support such a body of work, stripped him of his National Fascist Party membership and sent him to internal exile on the island of Lipari. In 1941, he was sent to cover the Eastern Front as a correspondent for Corriere della Sera, the Milano daily newspaper. His dispatches from the next three years would be largely suppressed by the Italian government, but reverberated among readers as painfully real depictions of a landscape at war.

The film editor, fluent in translating the written word over to the languages of sight and sound, began slowly translating Malaparte’s writings from World War II. The density and intricacy of his stories compelled Murch to adapt many of them into prose or blank verse poems. The result is a book of surprising insight and strange beauty.

Lawrence Weschler is regarded as one of the leading practitioners of literary nonfiction. His essays have appeared in The New Yorker for over twenty years, and his series of Convergences is a regular feature in McSweeney's Quarterly. The recipient of a Lannan Literary Award and the National Book Critics Circle Award for Criticism, he currently teaches at New York University.

Walter Murch is an Academy Award winning film editor and sound designer. His body of work includes The Rain People, American Graffiti, The Godfather Parts I-III, The Conversation, Apocalypse Now, Return to Oz, The English Patient, and Cold Mountain. He has been nominated for nine Academy Awards, and has won three Oscars for his work on Apocalypse Now and The English Patient. He is also the author of a book on film editing, In the Blink of an Eye, and is the subject of Michael Ondaatje's The Conversations.

Lawrence Weschler is most recently the author of Uncanny Valley: Adventures in the Narrative.
Praise
Praise for The Bird That Swallowed Its Cage

"Unusual, engaging literary synthesis from a renowned film artisan and his private obsession, an Italian writer and political radical largely unknown in America…sparkling prose drives a fascinating snapshot of a literary life buffeted by the great conflicts of his time."—Kirkus

"Curzio Malaparte is one of the most startling and unexpected chroniclers of the violence of the twentieth century, and Walter Murch's translations are tone–perfect." —Robert Hass