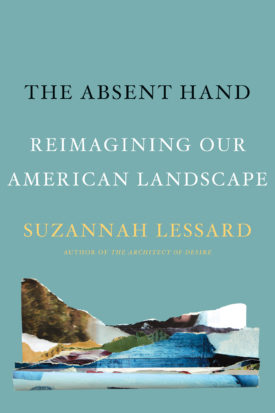 “Unusual and engaging . . . A subjective, Whitmanesque meditation on the way we live today . . . What makes this book compelling is not so much where the author goes, but how she reflects on what she sees when she gets there . . . Her wonderfully trenchant observations cast new light on the everyday.” –Witold Rybczynski, The Wall Street Journal

Following her bestselling The Architect of Desire, Suzannah Lessard returns with a remarkable book, a work of relentless curiosity and a graceful mixture of observation and philosophy. This intriguing hybrid will remind some of W. G. Sebald’s work and others of Rebecca Solnit’s, but it is Lessard’s singular talent to combine this profound book-length mosaic–a blend of historical travelogue, reportorial probing, philosophical meditation, and prose poem–into a work of unique genius, as she describes and reimagines our landscapes. In this exploration of our surroundings, The Absent Hand contends that to reimagine landscape is a form of cultural reinvention.
About Suzannah Lessard

SUZANNAH LESSARD is the bestselling author of The Architect of Desire: Beauty and Danger in the Stanford White Family, a New York Times Notable Book. A founding editor of The Washington Monthly and a staff writer at The New Yorker for twenty years, she is a recipient of the Whiting and Lukas Awards, and has received fellowships from the Woodrow Wilson International Center for Scholars and George Washington University.