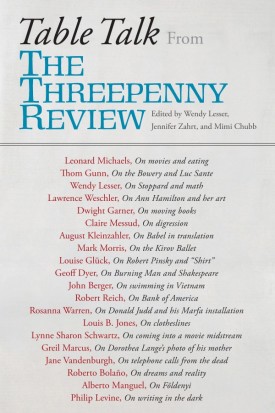 From the Threepenny Review

Table Talk is a portable dinner party and a book to read alone while laughing out loud. Table Talk is a salon attended by your smartest friends and by all of the wittiest people they know. Table Talk is a collection of brief but critically acclaimed, half serious/half tongue–in–cheek pieces that borrow the format of The New Yorker’s “Talk of the Town” column. Selected from several decades of The Threepenny Review, known colloquially as the West Coast’s New York Review of Books, these anecdotal essays debate the historical, artistic, and technological developments of our time.

Released to coincide with the 35th anniversary of The Threepenny Review in January 2015, Table Talk, edited by Wendy Lesser, Mimi Chubb and Jennifer Zahrt, includes essays by Christopher Ricks, who unfolds a dazzling literary history of the phrase “Table Talk”; Leonard Michaels on why the waltz should be viewed as an aggressive, imperialist dance; and Claire Messud on the art of digression in fiction and conversation. Sigrid Nunez engages with the contemporary vogue for memoir and autobiography, while Luc Sante draws conclusions about postmodern art from a stray bit of graffiti glimpsed on a New York street. Other contributions include Alexander Nehamas on the NEA controversy that roiled the culture wars of the 1990s and Paula Fox’s tips for interacting with difficult children.

Ninety–nine pieces become a garden of literary delights, as Table Talk takes an irreverent walk on the wild side of philosophical and cultural speculation that will resonate with readers of any age.

Wendy Lesser is the founding editor of the The Threepenny Review and the author of ten books, the most recent of which, Why I Read (FSG), was published in 2014.

Jennifer Zahrt, a freelance editor, holds a PhD in German Literature from UC Berkeley. Mimi Chubb, a Princeton graduate, has written for The Threepenny Review since 2005.
Praise
"[A] splendid ensemble of distinctive, erudite voices...This invigorating, idiosyncratic collection overwhelmed me with a sense of joy; for anyone hungering after the trials of aesthetic striving, it will prove impossible to resist." —The Boston Globe

"Pithy literary musings on art, culture, politics and life selected from the Threepenny Review's Table Talk section. Featuring essays published between 1990 and 2013, the anthology emulates a gathering of critics, philosophers, writers and artists in lively conversation.. . .While some contributions are time specific, most resonate with a universality that goes beyond their publication dates.. . .assemblage of ideas, critical thinking and wry observations, which is itself a swell digression.. . .An invigorating collection of passionate, spirited voices." —Kirkus

"These 99 pithy gems, "released to coincide with the 35th anniversary of "The Threepenny Review" in January 2015, are thought–provoking, inspiring, humorous, and sometimes breathtaking. A superb anthology." —Booklist