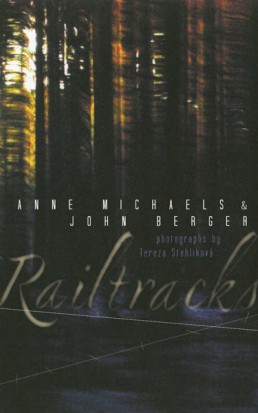 Railtracks is a unique collaboration between two writers of remarkable achievement. A profound meditation on railways, love and loss, at once intimate and committed, it moves from the industrial to the metaphysical, from the tectonic shifts of globalization to the interior pulses of memory, and from the present to a past that still exists in vivid, essential traces.

This sensual and exploratory dialogue is accompanied throughout by the evocative photography of Tereza Stehlíková, charting its own atmospheric passage by train through the forested, winter landscapes of Southern Bohemia.

Summoning potent, hidden histories and deeply personal journeys, Railtracks seeks, with a rigorous and reflective urgency, to bear witness to the pain of separations and the consolation of meetings.

John Berger is a storyteller, essayist, novelist, screenwriter, dramatist, and commentator. The author of numerous books, his most recent publications include Hold Everything Dear, From A to X, and Bento's Sketchbook. He lives in France.

Anne Michaels is the multi-award winning author of two novels, Fugitive Pieces and The Winter Vault, and three collections of poetry, The Weight of Oranges, Miner's Pond, and Skin Divers. She is also a composer for the theater. She lives in Toronto. Tereza Stehlíková is an artist and filmmaker. Co-founder of the cross-arts magazine Artesian, she also coordinates the international artists' collective Art in Touch. Born in Prague, she now lives and works in London.