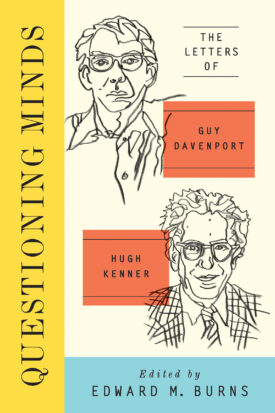 The Letters of Guy Davenport and Hugh Kenner

“The most intellectually exhilarating work published in 2018 . . . A lasting treasure.” —Michael Dirda, The Washington Post

Hugh Kenner (1923–2003) and Guy Davenport (1927–2005) first met in September 1953 when each gave a paper on Ezra Pound at Columbia University. They met again in the fall of 1957, and their correspondence begins with Kenner’s letter of March 7, 1958. In the next forty–four years, they exchanged over one thousand letters. An extraordinary document of a literary friendship that lasted half a century, the letters represent one of the great and—with the dawn of the age of text and Twitter—one of the last major epistolary exchanges of its kind. Students and lovers of modernism will find, in the letters, matchless engagements with Eliot, Joyce, Beckett, Basil Bunting, Charles Tomlinson, R. Buckminster Fuller, Stan Brakhage, Jonathan Williams, and the American modernists William Carlos Williams, Marianne Moore, and Louis Zukofsky. The correspondence ends with Kenner’s letter of August 9, 2002, lamenting how they had drifted apart.

The extensive notes and cross–referencing of archival sources in Questioning Minds are a major contribution to the study of literary modernism. The letters contained within explore how new works were conceived and developed by both writers. They record faithfully, and with candor, the urgency that each brought to his intellectual and creative pursuits. Here is a singular opportunity to follow the development of their unique fictions and essays.

HUGH KENNER (1923-2003), literary critic and distinguished Joyce scholar, held academic posts at the University of California, Santa Barbara; Johns Hopkins University; and the University of Georgia. He was the author of twenty books, including The Pound Era, Joyce's Voices, and A Homemade World.

Winner of the Morton N. Cohen Award for a Distinguished Edition of Letters

“The most intellectually exhilarating work published in 2018 . . . A lasting treasure.” —Michael Dirda, The Washington Post

“Questioning Minds, a gem of the form . . . amounts to something like an intellectual love affair, replete with moments of courtship, seduction, devotion, and, eventually, betrayal . . . We are unlikely to find a document of its like again . . . The collection is wonderfully, exhaustively annotated throughout by editor first Edward Burns . . . Questioning Minds often reads like the almanac of a brilliant and eccentric family. Beneath the heat of their native curiosity, even the most arcane subjects achieve a sudden, flaring warmth.” —Dustin Illingworth, The Paris Review

“Gives readers unprecedented access to two of the greatest interpreters of the modernist legacy working parallel, both independently and jointly, like a pair of riders on a tandem bike . . . What separates the publication of these Kenner/Davenport letters from Selected Letters of John Keats, or those of Woolf or Wilde or Kafka, is that this book offers readers the back–and–forth, the conversation—not one side, but both . . . Here we get the whole exchange, or as much of it as one could ever expect to be privy to. Therein lies the marvel of a book like this: it clearly reveals the letter for the philosophical form it is—a true dialogue.” —Tyler Malone, Lapham's Quarterly

“Two of the great literary polymaths of the 20th century converse about art, literature, scholarship and the life of the mind.” —The Washington Post, One of the Year's 50 Notable Works of Nonfiction

“Editor Edward M. Burns has done a monumental job assiduously annotating this vast correspondence . . . Kindred spirits reminiscent of Emerson and Thoreau, these 'questioning minds' were two of the most refined artistic sensibilities this continent has ever produced. Readers can be grateful that their complex friendship has been so beautifully enshrined in Burns’s scrupulous volumes.” —Greg Gerke, Los Angeles Review of Books

“Potential readers may consider the 1800–plus page length and wonder if the rewards will be worth the journey. The answer is absolutely yes.” —W. C. Bamberger, Rain Taxi

“The volumes constitute the liveliest epistolary correspondence I’ve encountered over my life as a reader.” —William H. Pritchard, The Hudson Review

“Questioning Minds deserves an audience because it allows readers the privilege of immersion in examinations of Modernist writing, in witnessing earnest and, at times, witty or humorous exchanges, and in seeing how academic (Kenner) and creative (Davenport) projects arise from chance remarks, are worked out (or abandoned), and, now and then, collaborated on . . . Any reader could profitably trace personages thanks to the index . . . and discover connections and insights on this or that artist that show the deep and broad learning these two friends had and enjoyed seeing in the other.”—Jeff Bursey, The Quarterly Conversation

“The correspondence of Guy Davenport and Hugh Kenner is a feast . . . There is as much bromance as brilliance in Questioning Minds . . . A delight.” —Tim Conley, James Joyce Quarterly

“These two massive volumes, solidly bound and with a sturdy slipcase, are the fruit of who knows how many hours (how many years) of editorial labor by Edward M. Burns, who should get the editorial equivalent of a Pulitzer or a National Book Award.” —John Wilson, First Things

“These letters serve as a phenomenology of everyday life, a fascinating peek into two minds fighting the mildewed slumber of modernity by paying deep attention to the things a modern person might take for granted. To read these letters is to bear witness to how this kind of attention animates two highly eccentric thinkers.” —Trevor Logan, The Curator

“Questioning Minds is a monument to the strange and wonderful relationship of two oddballs uniting to make an odd couple.” —Jeet Heer, The New Republic

“The letters take us behind [Kenner and Davenport's] published writings into the preparatory questioning, discovering and drafting, and into aspects of their lives, interests and personalities that were not public . . . A major contribution to our knowledge of these two brilliant minds.” —A. David Moody, The Times Literary Supplement

“A remarkably fruitful correspondence . . . The letters are a treasure.” —Denis Donoghue, The New Criterion

“The letters are frank, candid expressions of two creative geniuses, most dating from the apex of their powers (mid–50’s through the mid–70’s, roughly). The personal experiences of the two men weave themselves beautifully around intense and erudite cultural observations which it takes time and attention to fully appreciate . . . Beautiful, moving, and lively . . . As Kenner and Davenport communicate to one another, the best that Western civilization has to offer speaks to us through them.” —Scott Beauchamp, Claremont Review of Books