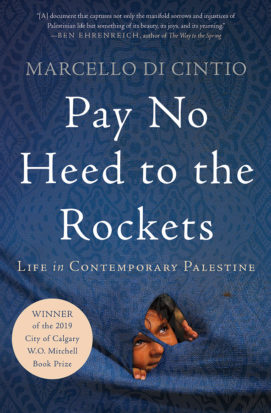 Pay No Heed to the Rockets

“With humility, respect, and great sensitivity, he seeks out writers, people skilled at telling stories, and asks them to narrate their own situations. The result is a document that captures not only the manifold sorrows and injustices of Palestinian life but something of its beauty, its joys, and its yearning.” —Ben Ehrenreich, author of The Way to the Spring

Taking the long route through the West Bank, into Jerusalem, across Israel, and finally into Gaza, Marcello Di Cintio meets with Palestinian poets, authors, librarians, and booksellers to learn about Palestine through their eyes. Pay No Heed to the Rockets offers a look at life in contemporary Palestine through the lens of its literary culture, one that begins with art rather than with war.

MARCELLO DI CINTIO is the author of four books, including the critically acclaimed Walls: Travels Along the Barricades, winner of the 2013 Shaughnessy Cohen Prize for Political Writing and the City of Calgary W.O. Mitchell Book Prize. Di Cintio's essays have been published in The Walrus, Canadian Geographic, The New York Times, Condé Nast Traveller, and Afar. He lives in Calgary.

Praise
Praise for Pay No Heed to the Rockets

“In Pay No Heed to the Rockets, Marcello Di Cintio does something fundamental, and crucial, that foreign writers visiting Palestine rarely bother with: he listens. With humility, respect, and great sensitivity, he seeks out writers, people skilled at telling stories, and asks them to narrate their own situations. The result is a document that captures not only the manifold sorrows and injustices of Palestinian life but something of its beauty, its joys, and its yearning.” —Ben Ehrenreich, author of The Way to the Spring: Life and Death in Palestine

“Marcello Di Cintio is an active participant who reacts emotionally to the Palestinians he interviews . . . Rather than focusing on the ugliness of deprivation, he seeks out the experiences of Palestinian writers and artists for whom, he says, nothing is more beautiful than a story . . . Through its rich descriptions, Pay No Heed to the Rockets depicts Palestine as a place filled with life and hope . . . Di Cintio explores the lived experiences, of a people whose homes, but not their identities, have been displaced.” —Sam Risak, Los Angeles Review of Books

“Traveling through the West Bank, into Jerusalem, across Israel, and into Gaza, Di Cintio reveals life in contemporary Palestinian territories through the lens of its authors, books, and literature . . . Throughout he finds 'no life undarkened . . . by conflict' but also 'no life wholly defined' by it either.” —Amy Alipio and Starlight Williams, National Geographic

“One of the great tragedies of Palestine is how little most outsiders know of everyday Palestinians. Journalist Di Cintio narrows this gap by recounting his nearly 20 years of visits to the West Bank and Gaza, weaving conversations around the writings of Palestine’s many literary figures . . . Literature, history, and politics inevitably intertwine . . . A timely and exquisite book.” —Booklist (starred review)

“Di Cintio (Walls: Travels Along the Barricades) offers a powerful and perceptive reflection on Palestinian culture in a memoir that mixes travelogue and literary appreciation . . . Di Cintio’s prose is wonderfully descriptive, whether portraying libraries and bookstores dedicated to preserving and promoting a cultural history threatened with elimination or recounting stories of novels being written in prison on cigarette wrappers. This is a refreshing and hopeful reminder that on both sides of the Israeli–Palestinian conflict are countless people who wish to live their lives free of the hatred borne of geopolitical conflict.” —Publishers Weekly (starred review)

“Leaving aside the usual political covens and an inclination to despair, Di Cintio's lucid account of present–day Palestine is the inspired portrait of a nation in dialog with its ghosts past and future affirming its right to be. This is a necessary book for our bewildered times.” —Alberto Manguel, author of A History of Reading, and The Dictionary of Imaginary Places

“Di Cintio’s tour is a good introduction to current Palestinian literary life. He tries to take no side in the conflict . . . What he’s advocating for is sympathy for human beings.” —Mike Wold, Real Change

“Pay No Heed to the Rockets is a daring act. That Di Cintio (author of Walls and Poets and Pahlevans) researches his subjects thoroughly, conducts in–depth reporting, and writes with vigour and humility is further testimony to his skill in handling one of the most divisive political stories of the last 100 years.” —Quill and Quire

“Interweaving history and politics, the book introduces Western readers to the modern Palestinian literary scene while celebrating the rich diversity of voices that comprise it. Illuminating reading from a highly engaged author.” —Kirkus Reviews

“This blend of history and travel will interest all seeking a better understanding of Palestinian life.” —Library Journal

“There have been many books detailing the lives of the millions of people crammed into the confines of what critics have called an open–air prison, but none written by an outsider has delved so insightfully into the lives Palestinians live in their own minds, the dreams and mental challenges that help them to get through each day. It’s a heartbreaking achievement, necessary reading even in the extremely busy field of writing on this subject.” —Open Letters Review

“Di Cintio, a journalist and essayist best known for the award–winning Walls: Travels Along the Barricades, recounts his experiences with Palestinian fiction writers and poets in the West Bank, Israel, and Gaza whose work steers clear of patriotic pieties . . . Pay No Heed to the Rockets marks the successful culmination of a personal journey in which Di Cintio strove 'to see Palestinians as a people unto themselves, not merely as one half of a warring binary. Not in opposition but in situ.'” —Rayyan Al–Shawaf, The Believer

“A masterful work. Di Cintio weaves together history with a sense of place, character and dialog infused with humor, to produce a contemporary portrait of a people who continue to resist both occupation and simple categorization.” —Selma Dabbagh, author of Out of It, nominated for The Guardian's Book of the Year