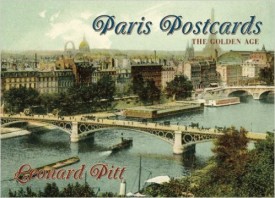 In this stunning volume of historic postcards featuring the City of Light, Leonard Pitt takes us deep into the art and heart of the postcard and Paris itself. Showcasing the variety of images from his personal collection, the postcards create an enduring time capsule, one that reveals a Paris that no longer exists.

The invention of the postcard in the 19th century revolutionized communication and created the original social networking tool: At the height of their popularity in the late 19th and early 20th centuries, France was producing a million postcards a day, and collecting became a craze that spread around the world.

The postcards here reveal the true artwork of the original medium, from hand–tinting techniques to nostalgic details too small to see with the naked eye: Sandwich–board men asleep on park benches, a cheese vendor eyeing a woman passerby. The messages penned to loved ones back home are perhaps the most delightful gems: “Bringing your wife to Paris is like bringing a meal to a banquet,” quips one traveler.

In its colorful entirety, Paris Postcards offers an addictively voyeuristic slice of the American experience of Paris in the early 20th century.

Praise
"A discrete declaration of love, an array of surprising discoveries. His passion for Paris is that of a true Parisian." —Métro

"How can we not be astonished by Leonard Pitt's profound knowledge of Paris history, and he's from . . . Michigan." —L'Echo