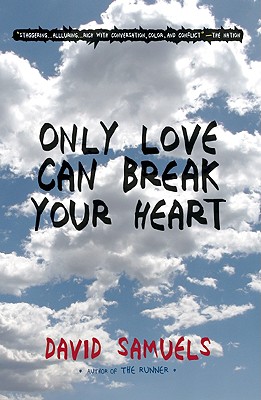 Only Love Can Break Your Heart

In Only Love Can Break Your Heart, David Samuels writes with a reportorial acumen and stylistic flair that recall the pioneering New Journalism of Gay Talese, Tom Wolfe, and Joan Didion. Combining elegant, nuanced personal essays with far–out reporting—on the lives of radicals in the Pacific Northwest, anti–abortion zealots, demolition experts, suburban hip–hop stars, and more—Samuels shows us an American landscape whose unsettling mix of profound dislocations and blue–sky optimism is both instantly recognizable and thrillingly new.

These essays display his unusual sensitivity to both the tragic and comic dissonances that bubble up from the gap between the American promise of endless nirvana and the lives of salesman, dreamers, aging baseball legends, crackpots, atomic test site workers, and dog track bettors who struggle to live out their dreams one day at a time.

David Samuels, a contributing editor at Harper's magazine and a longtime contributor to The Atlantic and The New Yorker, is the author of Only Love Can Break Your Heart and The Runner. He is the literary editor of Tablet Magazine.

"He's a savant when it comes to scene reporting and has a nearly autistic command of minor details and facts. Armed with minutiae, he achieves the glorious breadth and details of a mural painter." —Village Voice

"The protraits that emerge are exhaustive and often severe, but there is something delicate in Samuel's method. In his stories the random flow of events takes on real meaning, allowing us to see what's hidden in plain view and to hear what's being said." —The New York Times Book Review

"Samuels is heir to an American tradition, and writing this terrific needs a place to go." —Los Angeles Times