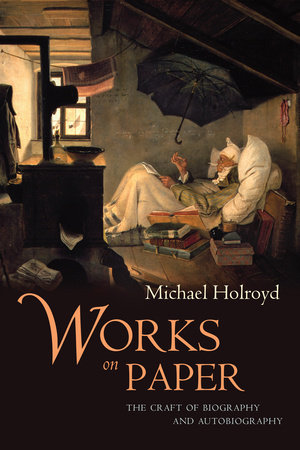 The Craft of Biography and Autobiography

Works on Paper is a selection by one of today’s leading biographers from his lectures, essays, and reviews written over the last quarter of a century—mainly on the craft of biography and autobiography, but also covering what Michael Holroyd describes as his “enthusiasms and alibis”.

Opening with a startling attack on biography, which is answered by two essays on the ethics and values of non–fiction writing, the book goes on to examine the work of several contemporary biographers, the place of biography in fiction and of fiction in biography, and the revelations of some extravagant autobiographers, from Osbert Sitwell to Quentin Crisp—to which he adds some adventures of his own, in particular an important and unpublished piece The Making of GBS, a riveting story of internecine literary warfare.

The book ends with a series of satires, celebrations, apologias and polemics which throw light not only on Michael Holroyd’s progress as a biographer, but also his record as an embattled campaigner in the field of present–day literary politics.

Michael Holroyd was born in 1935 and educated at Eton College. His lives of Hugh Kingsmill, Lyton Strachey, Augustus John and George Bernard Shaw have established him as one of the most influential biographers of modern times. His family autobiography, Basil Street Blues (1999) garnered the greatest number of non–fiction and end–of–year critics' choices that year. A past chairman of the Society of Authors, the Royal Society of Literature and Book Trust, past president of English PEN and a former member of the Arts Council, Michael Holroyd has lectured around the world for the British Council and at literary festivals. He is married to the novelist Margaret Drabble and lives in London and Somerset.

"Michael Holroyd is the grand old man of English biography and, in this elegant collection of essays, champion of the genre's freedom and truthfulness. . . . The themes of his life's work, its broad historical significance are wonderfully distilled here, and as Shaw wrote to Ellen Terry, 'let those who complain that it was all on paper remember that only on paper has humanity yet achieved glory, beauty, truth, knowledge, virtue and abiding love.'" —Financial Times

"He is peerless in his powers of psychological penetration, graced with an easy, lucid and buoyant style (I have never caught him involved in a dull or prolix sentence) and exceptionally rich in the two greatest of all biographer's virtues—the knack of telling a human story, and an inexhaustible curiosity about people and the existential gap between what they do and who they are." —The Spectator

"Holroyd writes with such elegance and adroit humour. . . . The book is also full of bon mots about biography, amusing anecdotes . . . and plenty of good jokes." —The Evening Standard

"Here then, is a thought–provoking, entertaining and wonderfully exhilarating collection from the hand (though should I say from the quill?) of the master. . . . Yet in its old–fashioned confidence and charm, it raises anxieties about the future. Michael Holroyd has presided with a genial and generous wand over what he calls a golden age of biography. But perhaps (one more paradox) it has also been an innocent age. Now self consciousness sets in, the form fragments, the big stories have been told, the dons and critics and media men are beating at the garret door." —The Saturday Daily Telegraph
Don't miss news & events from Counterpoint Press.
Subscribe to the newsletter today.