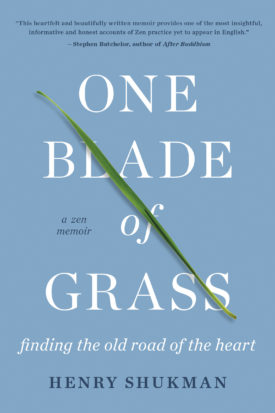 One Blade of Grass

Finding the Old Road of the Heart, a Zen Memoir

“If you’ve ever wondered how a messed up kid like you or me might master the wisdom of Zen, One Blade of Grass is the adventure for you. It’s great company–and after reading it, you might recognize that you’re further along than you imagined.” –David Hinton, editor and translator of The Four Chinese Classics and author of The Wilds of Poetry

One Blade of Grass tells the story of how meditation practice helped Henry Shukman to recover from the depression, anxiety, and chronic eczema he had had since childhood and to integrate a sudden spiritual awakening into his life. By turns humorous and moving, this beautifully written memoir demystifies Zen training, casting its profound insights in simple, lucid language, and takes the reader on a journey of their own, into the hidden treasures of life that contemplative practice can reveal to any of us.

“This heartfelt and beautifully written memoir provides one of the most insightful, informative, and honest accounts of Zen practice yet to appear in English.” –Stephen Batchelor, author of After Buddhism

HENRY SHUKMAN is an English poet and writer. He is the recipient of the Arvon Poetry Prize, the Jerwood Aldeburgh Poetry Prize, the Author's Club First Novel Award, an Arts Council England Writer's Award, and was named a finalist for the O. Henry Award. He teaches at the Mountain Cloud Zen Center in Santa Fe, New Mexico, and is a Zen Teacher in the Sanbo Kyodan lineage.

"Lovely prose . . . This memoir will resonate most with readers wanting to understand the slow, rocky process of practicing Zen." --Publishers Weekly

"How Zen led one man to awareness of the miraculous . . . A graceful, insightful, and disarmingly candid memoir . . . Zen, Shukman writes, teaches not to withdraw but to accept life, pain, suffering, and beauty: 'Unless a path leads us back into the world--reincarnates us, as it were--it's not a complete path.' Shukman now leads his own Zen center in New Mexico. A vibrant chronicle of a profound spiritual journey." --Kirkus Reviews


"Instead of depicting any dark night of the soul, One Blade of Grass focuses on describing how an ill-at-ease young man is gradually made calmer and kinder by Zen's central insight: the self is an illusion, and beyond the deceptive veil of thinking, reality is but an infinite, loving void . . . There is plenty to admire here. Sections are captivating, and poignant: we find the same plain lyricism that animates Shukman's poetry. His epiphanies are well rendered, and some of them are shockingly trippy . . . One Blade of Grass has a sincerity and generosity that make one feel that it must be pretty marvellous to attend a retreat at the Mountain Cloud Zen Center in Santa Fe, where Shukman is now a teacher . . . The weight of life's ephemerality is what pushes many people towards Buddhism. One Blade of Grass evokes this disquiet with tender force . . . Henry Shukman is earnest and warm-hearted in his attempts to show readers a better way. Yet like Zen itself, One Blade of Grass offers a quicksilver kind of wisdom, eluding even as it charms." --M. M. Owen, The Times Literary Supplement

"Henry is able to touch on so many different topics with a brilliant articulation that one would expect from a poet . . . a phenomenal read." --James Beshara, Below the Line

"I read a spiritual book just about every week in preparation for my next interview. This one really drew me in. Having been a professional writer for decades; being an honest, open, and loving person; and having achieved a deep degree of realization, Shukman has written a book that resonates on all levels--head, heart, and gut. He's the kind of guy with whom you'd enjoy taking a cross-country drive. The time would fly, and you'd never be bored." --Rick Archer, Buddha at the Gas Pump podcast

"Riveting . . . As Shukman traces his transformation in exquisite prose, even those discomfited by his intimate revelations can't help but be inspired by his courage and persistence. Shukman's journey reassures us that a profound awakening is possible for practitioners willing to go to any lengths." --Joan Duncan Oliver and Cara Dibdin, Tricycle: The Buddhist Review

"Deeply honest chronicle . . . There's plenty to realize in this book about meditation and Zen wisdom, and yet there's so much more, too. Shukman expresses his depth of feelings, insights, and observations with an incisive candor that is magnetic . . . he taps into so many things worth knowing." --Wolf Schneider, Fine Lifestyles Magazine Sante Fe & Albuquerque

"Through Henry's personal stories--that are eminently readable--we get to find the profound insights of Zen and how they can lead one to living a gentler, kinder, and more fulfilling life." --Stillness Speaks

"This is the book Shukman was born to write--I've been waiting a long time for someone to write this--a record of how we evolve, from ignorance and suffering as a young boy, tracking his accidental awakening, discovering in fits and starts his way-seeking mind to peace and the ground of being. So beautifully written, the reader immerses along with the author on his stumbling path to wholeness. In parts hilariously funny, I cannot say enough--I love this book." --Natalie Goldberg, author of Writing Down the Bones and The Great Failure

"What a wonderful and generous book this is, Roshi Shukman sharing so openly his particular path into the depths of Zen, and sharing also those depths themselves. If you've ever wondered how a messed up kid like you or me might master the wisdom of Zen, One Blade Of Grass is the adventure for you. It's great company--and after reading it, you might recognize that you're further along than you imagined." --David Hinton, editor and translator of The Four Chinese Classics and author of The Wilds of Poetry

"There's no two ways about it. Henry Shukman has a seductively natural style of writing. And the story he tells is both informative and inspiring. Shukman grew up in a culturally rich but physically and emotionally painful situation. Upon encountering the writings of Zen Master Dogen, he was fortunate to have an early experience of the reality that mountains dance. This planted a seed which eventually bore the fruit of happiness at the deepest level--happiness independent of conditions. Read and be encouraged." --Shinzen Young, author of The Science of Enlightenment

"This heartfelt and beautifully written memoir provides one of the most insightful, informative, and honest accounts of Zen practice yet to appear in English." --Stephen Batchelor, author of After Buddhism