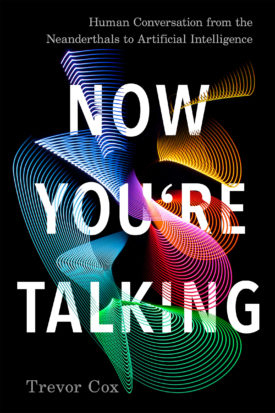 Human Conversation from the Neanderthals to Artificial Intelligence

A history of how humans developed our capacity for conversation—and what might happen now that computers are catching up.

Trevor Cox has been described by The Observer as “”a David Attenborough of the acoustic realm.”” In Now You’re Talking, he takes us on a journey through the wonders of human speech, starting with the evolution of language and our biological capability to speak (and listen), and bringing us up to date with the latest computer technology.

Language is what makes us human, and how we speak is integral to our personal identity. But with the invention of sound recording and the arrival of the electrified voice, human communication changed forever; now advances in computer science and artificial intelligence are promising an even greater transformation. And with it come the possibilities to reproduce, manipulate, and replicate the human voice—sometimes with disturbing consequences.

Now You’re Talking is the fascinating story of our ability to converse. It takes us back to the core of our humanity, asking important questions about what makes us human and how this uniqueness might be threatened. On this illuminating tour we meet vocal coaches and record producers, neuroscientists and computer programmers, whose experience and research provide us with a deeper understanding of something that most of us take for granted—our ability to talk and listen.

Praise
Praise for Now You're Talking

"The spectrum of sounds humans emit are not only the lifeblood of conversation—they are central to our sense of who we are and where we come from. In his book Now You're Talking, acoustic engineer and BBC radio presenter Trevor Cox zooms in on the basic mechanics of our vocal abilities, broadly surveys the ways our speaking voices define and reflect identity, and asks what it means when this most human quality can be replicated by computers." —Psychology Today

"A lively, intelligent and persuasive history of speech." —Laura Freeman, The Times

"A lucid look at the science behind human communication . . . The greatest takeaway from the book is the welcome thought that our best moments as human communicators are in ordinary conversations, 'quotidian activity that allows knowledge about how to survive and thrive to be passed between us.' There's lots to ponder in Cox's geekily entertaining exploration of how we acquire our voices and understand those of others." —Kirkus Reviews

"Cox proves an affable guide, and his sharp history will give casual science buffs a lot to talk about." —Publishers Weekly

"Cox carefully examines the physiology of the vocal apparatus and details the latest evolutionary theories of early hominid speech . . . A book giving readers much to talk about." —Booklist

Praise for The Sound Book

"This small encyclopedia of strange sounds reveals how much art there is in the act of listening. Reading it made my ears more mindful." —Adam Gopnik

“Anyone who has ever clapped, hollered, or yodeled at an echo will delight in [Cox’s] zestful curiosity.” —The New York Times

"From its first page to its last, The Sound Book invites readers to close their eyes and open their ears to the sounds, both normal and peculiar, that surround us all." —Science News

"[A] mission to make sound tourism the next big thing." —Gemma Tarlach, Discover

"Charming... From its first page to its last, The Sound Book invites readers to close their eyes and open their ears to the sounds, both normal and peculiar, that surround us all." —Sid Perkins, Science News Magazine

"Cox reminds us not only of the sonic marvels we often miss, but also how those sounds affect us." —Publishers Weekly

"An intriguing tour d'horizon of the world of sound." —Kirkus Reviews

"A technological travelogue conducted by an expert tour guide, bursting with aural arcana that adds just the right amount of tech–savvy detail, The Sound Book brings into relief a world often obscured in our image–heavy existence. Even as we follow Cox to the ends of the Earth, what makes his book a real rush is that it's ultimately an ear–buzzing journey to the center of our minds." —Greg Milner, author of Perfecting Sound Forever

"A riveting ear–opener, Trevor Cox describes in lyrical detail a range of sonic events and new ways of listening that can only brighten our experience of the acoustic world around us. A must–read for sound–lovers of all stripes." —Bernie Krause, author of The Great Animal Orchestra: Finding the Origins of Music in the World's Wild Places