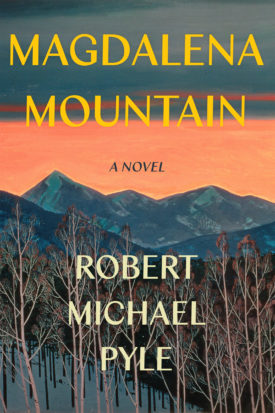 In Magdalena Mountain, Robert Michael Pyle’s first and long–awaited novel, the award–winning naturalist proves he is as at home in an imagined landscape as he is in the natural one. At the center of this story of majesty and high mountain magic are three Magdalenas—Mary, a woman whose uncertain journey opens the book; Magdalena Mountain, shrouded in mystery and menace; and the all–black Magdalena alpine butterfly, the most elusive of several rare and beautiful species found on the mountain.

And high in the Colorado Rocky Mountain wilderness, sharing the remote territory of the Erebia magdalena butterfly, lives the enigmatic Oberon, a reluctant de facto leader of the Grove, a diverse community of monks who share a devotion to nature. Converging in the same wilderness are October Carson, a beachcomber–wanderer in pursuit of the alpine butterflies he collects for museums; James Mead, a young graduate student intent upon learning the ecology of this seductive creature; and Mary Glanville, who also seeks the butterfly but can’t remember why.

While the mystery surrounding Mary takes a menacing turn, their shared quest pulls them deeper into the high mountain wilderness, culminating in a harrowing encounter on the stony slopes of Magdalena Mountain.

“This novel is a fast–paced light–hearted frolic, equal parts nature study, biological inquiry, mystery of identities, and eco–feminist manifesto . . . Humor and wit bubble up throughout, aided by the vast range of Bob’s knowledge of literature and biology.” —Chinook Observer

“Pyle seduces his readers into pondering the world around them . . . Generous, joyful, a tad eccentric and a ton exuberant.” —Coast Weekend

“For those of us devoted to his nonfiction, Pyle’s imaginative treatment of the nonhuman world—he includes a butterfly and a mountain among his cast of characters—is both a surprise and perhaps a natural result of his artistic development. Like Nabokov, Pyle has consistently straddled the worlds of science and the imagination.” —Mary Ellen Hannibal, Nautilus

“A sprawling meditation on nature, spirituality and identity wrapped in a gripping, fast–moving narrative with a rich command of literary language that might raise a smile on the face of his idol, legendary novelist (and fellow lepidopterist) Vladimir Nabokov.” —Coast Weekend

“The first novel from prolific nature writer Pyle is bathed in exquisite and venerating descriptions of nature, wildlife, and pristine environments . . . His contemplative novel will be a treat for readers who delight in the tranquility of nature.” —Publishers Weekly

“[A] lyrically wrought tale of discovery, exploration, and renewal . . . In this debut novel, acclaimed nature writer Pyle (Mariposa Road, 2010) brings a lush sense of the majesty, mystique, and magic to be found in all of nature’s forms.” —Booklist

“Only Robert Michael Pyle could’ve written this daring novel. He’s walked in the boots of his colorful characters, whether strolling across the Yale campus or chasing rare butterflies in the wilds. He masterfully describes the seasonal nuances of a singular mountain. His love and exquisitely detailed understanding of the natural world fills these pages.” —Jim Lynch, author of Before the Wind

“Fans of Robert Michael Pyle’s nonfiction will not be surprised to find his first novel abounding in details of the natural world—lovingly described plant and animal and insect life across the changing of the seasons on a remote Colorado mountain. What they may not expect is the bold imagination he brings to these pages—an amnesiac who might be the reincarnation of Mary Magdalene, a pantheist colony of monks in cahoots with feminist antinuclear activists, a Yale graduate student on the trail of a mysterious hitchhiking lepidopterist! Magdalena Mountain is thoroughly original, and thoroughly Robert Michael Pyle. Enjoy!” —Molly Gloss, author of The Hearts of Horses

“Magdalena Mountain is a remarkable melding of all the talents and passions of Bob Pyle. It will tingle your spine, even as it tickles your funny bone. “ —Kathleen Dean Moore, author of Piano Tide

“Robert Pyle is one of the best nature writers in the world, period.” —Brian Doyle, author of Mink River

“Pyle delivers a beautiful novel made stunning through his precise observations of the natural world. Fans of Claire–Louise Bennett will sink into the descriptive and captivating prose. Whether he’s describing a Greyhound bus or the winter schedules of owls, Pyle will keep you entranced with his perfect imagery. Absolutely enchanting!” —Laura Graveline, Brazos Bookstore (Houston, TX)