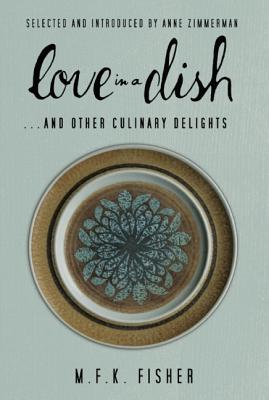 Love in a Dish… and Other Culinary Delights

By Notes by Anne Zimmerman

Whether the subject of her fancy is the lowly, unassuming potato or the love life of that aphrodisiac mollusk the oyster, Mary Frances Kennedy Fisher writes with a simplicity that belies the complexities of the life she often muses on. She is hailed as one of America’s preeminent writers about gastronomy, but limiting her to that genre would be a disservice. A passionate and well-traveled woman, her narratives fill over two dozen highly acclaimed books. In this collection of some of her finest works, Fisher demonstrates a palette well-trained not only in gastronomical masterpieces, but in life’s best pleasures as well.

Love in a Dish . . . and Other Culinary Delights is an instructional manual on how to live, eat, and love brought together by prolific researcher and culinary enthusiast Anne Zimmerman. With great care she has selected essays that forgive, and celebrate, our lustful appetites, as in “Once a Tramp, Always . . . ” and “Love in a Dish.” It is through these selections, including two essays never before collected in book form, that we encounter Fisher’s bold passion for cuisine and an introduction to her idea of what constitutes the delicious life.
About The Authors

M.F.K. Fisher helped shape the genre we call food writing. Over her expansive career Fisher's work comprised twenty-six books. She received lifetime achievement awards from the James Beard Foundation and the American Institute of Wine and Food. She died in 1992.

Anne Zimmerman's previous book about M.F.K. Fisher, An Extravagant Hunger, was published by Counterpoint. She lives in San Francisco.


MARY FRANCES KENNEDY FISHER was the preeminent American food writer. She wrote thirty-three books, including a translation of The Physiology of Taste by Jean Anthelme Brillat-Savarin. Her first book, Serve It Forth, was published in 1937. Fisher's books are an amalgam of food literature, travel, and memoir.

Praise for Love in a Dish . . . and Other Culinary Delights by M.F.K. Fisher "Fisher was scarcely the first writer to connect the pleasures of food and sex, but she is among the cleverest to do so." --Booklist Praise for M.F.K. Fisher "If I were still teaching high-school English, I'd use [Fisher's] books to show how to write simply, how to enjoy food and drink but, most of all, how to enjoy life. Her books and letters are one feast after another." --Frank McCourt "She writes about fleeting tastes and feasts vividly, excitingly, sensuously, exquisitely. There is almost a wicked thrill in following her uninhibited track through the glories of the good life." --James Beard "M.F.K. Fisher is our greatest food writer because she puts food in the mount, the mind and the imagination all at the same time. Beyond the gastronomical bravura, she is a passionate woman; food is her metaphor." --Shana Alexander "I do not know of anyone in the United States . . . who writes better prose." --W. H. Auden