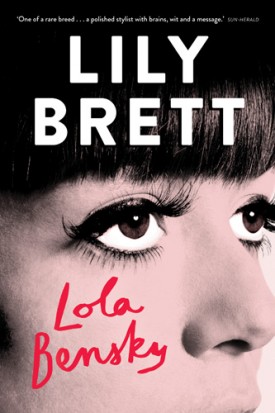 Lola Bensky is a nineteen-year-old rock journalist who irons her hair straight and asks a lot of questions. A high-school dropout, she’s not sure how she got the job – but she’s been sent by her Australian newspaper right to the heart of the London music scene at the most exciting time in music history: 1967.

Lola spends her days planning diets and interviewing rock stars. In London, Mick Jagger makes her a cup of tea, Jimi Hendrix (possibly) propositions her and Cher borrows her false eyelashes. At the Monterey International Pop Festival, Lola props up Brian Jones and talks to Janis Joplin about sex. In Los Angeles, she discusses being overweight with Mama Cass and tries to pluck up the courage to ask Cher to return those false eyelashes. Lola has an irrepressible curiosity, but she begins to wonder whether the questions she asks these extraordinary young musicians are really a substitute for questions about her parents’ calamitous past that can’t be asked or answered. As Lola moves on through marriage, motherhood, psychoanalysis and a close relationship with an unexpected pair of detectives, she discovers the question of what it means to be human is the hardest one for anyone–including herself–to answer.
About Lily Brett

Lily Brett was born in Germany and moved to Melbourne with her parents in 1948. She is one of Australia's most loved, prolific and successful authors. She has published six works of fiction, seven books of poetry, and three essay collections to much critical acclaim around the world. Lily Brett is married to the Australian painter David Rankin. They have three children and live in New York.

Praise
"Based on the author's own experiences as a rock journalist in the '60s, this trippy novel has bold-faced names (Jimi! Cher! Mick!) and adventures galore." --People Magazine " In this semiautobiographical novel, best-selling Australian author Brett (Uncomfortably Close; Too Many Men) has crafted an appealing tribute to 1960s pop culture, with Jimi Hendrix, Janis Joplin, Cher, Mick Jagger, and others making cameo appearances. Brett also brilliantly evokes the heartbreaking emotional prison occupied by so many Holocaust survivors and their troubled children. This gorgeous and wise novel is sure to please readers of Jewish fiction, music fans, and anyone interested in the craft of writing." -- Library Journal "Based on Australian author Brett's own experiences as a rock journalist and daughter of Holocaust survivors, this is an inside look at an exciting time in rock 'n' roll history and it's great fun to eavesdrop on Lola's conversations with the iconic figures." --Booklist "Lily Brett evokes one of rock'n'roll's greatest eras--the 60s-- in her new novel... a poignant and autobiographical rumination on the inner life of an Australian music journalist named Lola Bensky... Brett creates a fascinating portrait of a woman searching for meaning and connections stolen from her family." --Publishers Weekly "German-born, Australia-raised, New York resident Brett (You Gotta Have Balls, 2006, etc.) invests some of her own multicultural back story in her eponymous protagonist, an innocent abroad in a rock-'n'-roll world...A curious mix of wide-eyed ingenuousness and death-haunted anxiety... so sweet-natured it's impossible not to like."--Kirkus