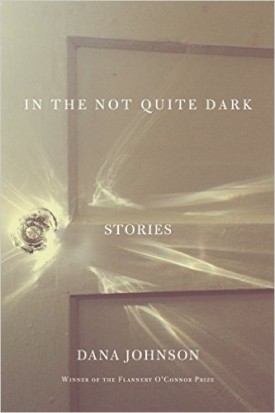 In the Not Quite Dark

Following her prize–winning collection Break Any Woman Down, Dana Johnson returns with a collection of bold stories set mostly in downtown Los Angeles that examine large issues –love, class, race – and how they influence and define our most intimate moments. In “The Liberace Museum,” a mixed–race couple leave the South toward the destination of Vegas, crossing miles of road and history to the promised land of consumption; in “Rogues,” a young man on break from college lands in his brother’s Inland Empire neighborhood during a rash of unexplained robberies; in “She Deserves Everything She Gets,” a woman listens to the strict advice given to her spoiled niece about going away to college, reflecting on her own experience and the night she lost her best friend; and in the collection’s title story, a man setting down roots in downtown L.A. is haunted by the specter of both gentrification and a young female tourist, whose body was found in the water tower of a neighboring building.

With deep insight into character, intimate relationships, and the modern search for personal freedom, In the Not Quite Dark is powerful new work that feels both urgent and timeless.

Dana Johnson is the author of Break Any Woman Down, Winner of the Flannery O'Connor Award for Short Fiction, and the novel Elsewhere, California. Both books were nominees for the Hurston/Wright Legacy Award. Born and raised in and around Los Angeles, she is an associate professor of English at the University of Southern California. Learn more at danajohnsonauthor.com.

Praise
Praise for In the Not Quite Dark

“Unquestionably excellent stories...In the Not Quite Dark has a variety of voices and stylistic tones yet holds together tightly as a collection." —Los Angeles Times

In her new collection, In the Not Quite Dark, [Johnson] offers 11 electrifying stories filled with tension and truth about present–day Los Angeles. "My mother died telling me what to do," her narrator begins in "No Blaming the Harvard Boys," a story about a young black student at a midwestern writers' workshop navigating the caste system at a tumultuous party at her professor's house. "She Deserves Everything She Gets" builds around the tension between the lessons parents teach young women about protecting themselves against rape and the dangers they don't foresee. Johnson's vision is razor sharp, her voice unmistakable. —LitHub

"Set against backdrops of gritty neighborhoods, Johnson's arresting story collection explores the boundaries of identity, relationships, and race. In "The Liberace Museum," Charlotte and her boyfriend, Hank, are traveling cross–country with plans for a pit stop in Vegas to tour the aforementioned attraction. Though Charlotte first suggests the visit as a joke, it reveals some uneasy complications in the young couple's relationship. In other tales, Johnson's characters find themselves haunted or perplexed by those around them. "Because That's Just Easier" portrays a mother struggling with her young daughter's newfound terror of the outdoors after a move to downtown Los Angeles, a situation that's further complicated by her aloof husband. "Rogues" follows a broke college student who visits his brother to ask for money but quickly becomes caught up in a mission to identify the assailants carrying out neighborhood break–ins. A flight to Paris in "Two Crazy Whores" connects a woman to a moment from her past. Emotions sneak up in many of Johnson's 11 stories, and her characters have no choice but to deal with what hits them." —Booklist

"With deep insight into character, intimate relationships, and the modern search for personal freedom, In the Not Quite Dark is powerful new work that feels both urgent and timeless." —Chicago Review of Books

"This prizewinning author's gorgeous, empathetic collection is composed of stories (mostly) in and about L.A. (the perfect place for musings about gentrification, discrimination, and love) that juxtapose the haves and the have–nots." —Marie Claire

"An insightful collection of stories that paint diverse portraits of present–day Los Angeles. Johnson exposes the deep ruptures between her characters' relationships to one another, their surroundings, and their pasts. … The city doesn't figure prominently in every story in the collection, but the themes of race, perspective, and history carry through. Eleven poignant stories that look to the past to portray the present." —Kirkus Reviews

"There is an exquisite tension in each of the stories in Dana Johnson's remarkable collection —couples who look past each other instead of into each other, women who try to negotiate upward mobility, wanting what you can't have and having what you don't want. Johnson has, truly, written an unforgettable collection. She is both a storyteller and an exacting observer of the beautiful ugly truths of Los Angeles, class, race, being alive." —Roxane Gay, author of An Untamed State and Bad Feminist

"In her brilliant collection, Dana Johnson presents a vision of America that is singular, utterly original, and necessary. These are superb stories grappling with the complexities of love and the way it winds through gender and race and class in our nation right now. Johnson is expert at exploring how the world tries to separate us —and how her characters find urgent ways to connect. These are stories radiant with beauty and compassion and clear–sighted, uncompromising wisdom." —Karen E. Bender, author of Refund, a Finalist for the National Book Award

"Newer than tomorrow, the stories in In the Not Quite Dark illuminate the travails of contemporary life faced with aspects of gentrification—social, economic, racial, even sexual. Johnson is the poet of the uneasy place between rising and falling, the pressures of status and humiliation, the precarious moral footing we are all navigating now. A sharp edged portrait of Los Angeles, and ourselves." —Janet Fitch, author of White Oleander and Paint it Black

"What a gift to have a new collection of hard–to–shake stories from the inimitable Dana Johnson. She writes about the contradictions of our contemporary moment with an honesty that is gimlet–eyed, rueful, and often wickedly funny. But along with implacable honesty there are also deep reserves of generosity in these stories, each one taking our hearts to places we don't see coming and can't readily forget." —Sarah Shun–Lien Bynum, author of Ms. Hempel Chronicles, a Finalist for the PEN/Faulkner Award

"In these haunting and beautiful stories, Dana Johnson conjures a definitive portrait of contemporary Los Angeles. Her native eye is infallible, and her voice reigns over the city with grace, wit, and total authority." —Jim Gavin, author of Middle Men