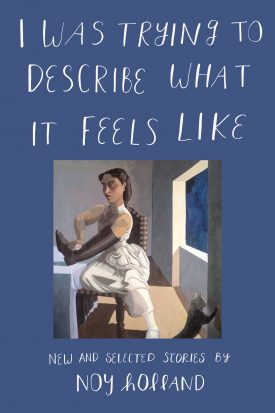 I Was Trying to Describe What It Feels Like

“These new and selected stories testify to the fact that there are still fine short story writers out there, doing the hard job of serious literary production in our age of tweets and memes…Holland’s language is challenging, elliptical, bristling with sensations and resounding with the interior lives of complicated, recognizable people.” ―The New York Times Book Review

In the twenty years since her first short story collection, The Spectacle of the Body, Noy Holland has become a singular presence in American writing. Her second and third collections, What Begins With Bird and Swim for the Little One First, secured her reputation as a writer who excels and excites, her prose described as unsettling and acutely wrought, rhythmic and lyrically condensed. Following the recent publication of Bird, her first novel, I Was Trying to Describe What It Feels Like is a gathering of stories, the majority of which have never before been published in book form. Set on two continents and ranging in length from a single page to a novella, these stories beguile and disrupt; they remind us of the reach of our compassion and of the dazzling possibilities of language.

“I Was Trying to Describe What it Feels Like,” from which the collection takes its title, is part love song, part fever dream–a voice demanding the ecstatic. Holland’s stories do not indulge in easy emotions, and they keep to the blessedly blurred frontier between poetry and prose.

NOY HOLLAND is the author of Bird: A Novel as well as three story collections, Swim for the Little One First, What Begins with Bird, and The Spectacle of the Body. Recipient of fellowships from the NEA, the MacDowell Colony and the Massachusetts Cultural Council, she teaches writing in the graduate program at the University of Massachusetts, Amherst.

Praise
Praise for I Was Trying To Describe What It Feels Like Longlisted for the Story Prize
Winner of the 2018 Katherine Anne Porter Award in Literature "These new and selected stories testify to the fact that there are still fine short story writers out there, doing the hard job of serious literary production in our age of tweets and memes...Holland's language is challenging, elliptical, bristling with sensations and resounding with the interior lives of complicated, recognizable people...There are distant echoes here of Ian McEwan's macabre, early work, Shirley Jackson's demonic families and even the apocalyptic landscapes of Cormac McCarthy. But Holland is a much different writer still, entangling her readers in experience-rich narratives about the various ways people try to love one another, live their lives in hard places and, with the best words they can manage, 'describe what it feels like.'" --New York Times Book Review "None of the stories in the collection are formulaic, and none of them are easy. Rather, they're sneaky, enigmatic, revealing themselves to the reader at unexpected times, sometimes long after the last word has been read...I Was Trying to Describe What It Feels Like is a strong collection, and Holland's writing is by turns hallucinatory, bizarre, and maddening in the best possible way. " --NPR "Over the past two decades, Noy Holland has been quietly publishing some of the finest short stories written in the English language . . . By turns earthy, reverent, poetic, and wry, these stories don't so much 'describe what it feels like' as make you feel what it feels like--the 'it' being what it is to be fully alive in the world." --Oprah.com "A treasure trove... Holland's prose makes the familiar seems strange and the strange seem familiar." --ELLE "There is always a visceral sense of something wild and untamable beneath the surface of Holland's stories, moving her characters through scenes and moving plots toward sharp conclusions." --Booklist Praise for Bird "After three widely praised story collections, Noy Holland's first novel, Bird, is a whirling and feverish illustration of how much time can be contained in the present moment. A master of the domestic, Holland takes us again into that sphere: into the life of Bird, a stay-at-home mother of two children, as she moves through the events of a single day.... It is here, in Holland's subtly radiant ¬details -- the odd syntax, the drawing's marriage of violence and love -- that Bird shines brightest, since they so aptly mirror what's happening beneath the domestic surface... Fans of Holland's prose will find much to love in Bird. The writing is hallucinatory, musical and intimate. It pulls you through, like the wind that blows through Bird's life, like time rushing past us, unable to be held. There's a sense that Holland's sentences are alive, and that life starts here -- with the stories we tell ourselves." --The New York Times Book Review "Bird is a slim novel, beautifully constructed and emotionally potent, without a word out of place. The book's premise is simple but powerful... But Bird's story is not the one about the dissatisfied housewife, the resentful mother -- instead it's a meditation on memory and nested selves, of the way in which these multitudes are contained in a person's body... The narrative slips easily between past and present in a way that feels organic and faithful to the experience of remembering. The result is both recognizable and wonderfully surreal... Her prose is poetic, lucid and haunting." --Los Angeles Times "A ravishing associative logic of recurrent objects and sounds distinguishes Noy Holland's original stories; the bird in the title is the writer, herself, surely a poet, singing of 'The slickened births and murders, ours, the fierce wide blowing day.' Old wisdom newly and grandly delivered." --Christine Schutt, author of Prosperous Friends "Every sentence in Noy Holland's Bird is, as always, an amazement, a complete drama about rhythm and texture and rendition that is in reality a complete drama about the brutal perplexities called our rented world." --Lance Olsen, author of Theories of Forgetting Praise for Spectacle of the Body "Ms. Holland possesses a love of words and imagery that lends her prose a surface brilliance that belies her often morbid subject matter. Her literary debts, it quickly becomes clear, are to Joyce and Faulkner (via John Hawkes and Gilbert Sorrentino), and her work fiercely upholds the modernist credo, in the words of the critic Frederick Karl, 'to defamiliarize the familiar.'" --Michiko Kakutani, New York Times "Noy Holland habitually challenges the usual limits of language, but the effects of her exuberance are never precious and often turn suddenly into beauty; her characters portray themselves in a discourse that is startling but genuine, the secret syntax of real lives." --William Ferguson, New York Times More Praise for Noy Holland "These stories...are not sentimental, nor are they artificially cold: they are wonderfully, nakedly human." --Brian Evenson, author of A Collapse of Horses: Stories "Holland's aims are ambitious, her tone right, her diction masterful, and she spells her stories out in bites of beautiful lyrical but bitter prose and with an ardent grimness of eye that is both unsettling and intensely satisfying." --William Gass, author of Eyes "If you could breed a writer out of Faulkner by John Hawkes, and out it in a female frame, you might have Noy Holland." --Padgett Powell, author of You & Me "Holland's scrupulousness and respect for the language keep this text alive and kicking...a book to be read slowly and thoughtfully shared." --John Edgar Wideman, author of Writing to Save a Life: The Louis Till File "The syncopated rhythms of Noy Holland's rapturous prose jolt the heart and spark the senses. If you can bear to explore the limits of your own compassion, open this book to Blood Country or Milk River. You cannot prepare yourself: you can only surrender." --Melanie Rae Thon, author of Silence and Song