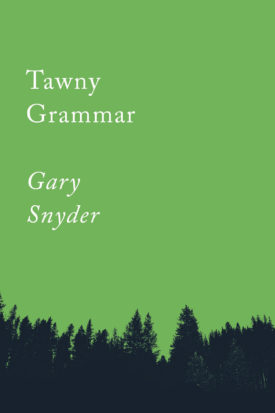 Two beautifully paired essays, “Tawny Grammar” and “Good, Wild, Sacred,” serve to offer an autobiographical framework for Gary Snyder’s long work as a poet, environmentalist, and a leader of the Buddhist community in North America.

He begins standing outside a community hall in Portland, Oregon, in 1943 and concludes as a homesteader in the backcountry of Northern California more than forty-five years later. A wonderful introduction to Gary Snyder, this will also serve to remind his faithful readers of the thrill of his insights and his commitments crucial to our future on Turtle Island. Each palm-size book in the Counterpoints series is meant to stay with you, whether safely in your pocket or long after you turn the last page. From short stories to essays to poems, these little books celebrate our most-beloved writers, whose work encapsulates the spirit of Counterpoint Press: cutting-edge, wide-ranging, and independent.
About Gary Snyder

Praise
Praise for The Practice of the Wild "Gary Snyder's deep hope-that someday we might all be native Americans, at home in our grand place--is the only hope we have. This is an exquisite book, and a hard one. Read it--and then live it, as best as you can." --Bill McKibben, author of Eaarth "I have always found it difficult to imagine this century without the life and work of Gary Snyder. After reading this collection of essays, I now find it impossible." --Wes Jackson, author of Nature as Measure: The Selected Essays of Wes Jackson "What thoughtful beauty! How skillfully Gary Snyder interfuses the practical knowledge of an animal sense with story, language, and song. True teachers in America are now an endangered species. I learn so much from this good man's perception, humor, discipline, and love for this world. I am honored to praise this book." --James Hillman, author of A Terrible Love of War "Contemplating Gary Snyder's depth of journey into nature here, I think of what D.H. Lawrence said of Whitman: he's camped out alone, way beyond everybody. But it's looking like where Snyder is, would be a wise bet for all of us. He makes a good trail in this book, laid out expertly and fun to walk on." --Thomas J. Lyon, author of This Incomparable Land "A primer, an etiquette, a book of instruction, The Practice of the Wild is an exquisite, full-sighted articulation of what freedom, wildness, goodness, and grace mean, using the lessons of the planet to teach us how to live." --Gretel Ehrlich, author of Facing the Wave "Essayist and Pulitzer Prize-winning poet Snyder (Turtle Island) offers nine sensitive and thoughtful essays blending his personal Buddhist beliefs, respect for wildlife and the land, and fascination with language and mythic tradition into a 'meditation on what it means to be human.'" --Publishers Weekly "More people should read this book than will. Snyder is, of course, an important writer, a Pulitzer Prize winner for poetry, and a spokesperson for the wilderness. Here in spare, eloquent prose, he presents a series of essays that probe the essence of humanity, nature, and their symbiosis... This is an important book for anyone interested in the ethical interrelationships of things, places, and people, and it is a book that is not just read but taken in. It is lamentable that many readers will spend their time taking in much lesser writers." --Library Journal Praise for Gary Snyder "Snyder's is a wise voice crying out on behalf of the wilderness with an authority and eloquence that's not been heard in our literature since Thoreau." --San Francisco Chronicle "His sense of the history of land and cultures and his ability to write as both the Worker and the Thinker create a fertile whole." --Los Angeles Times "No one has written so forcefully against urban sprawl, pollution, and mechanization. Somehow Snyder has managed to stay outside what used to be called the System and to remain a free man." --New York Times Book Review "Snyder is an elder statesman of the natural world and the tribal unions of poetry. He has a body of work as original as predecessors Williams Carlos Williams and Wallace Stevens." --The Bloomsbury Review "Snyder's essays are the best place to acquaint yourself with his belief that we are all 'rooted in nature' . . . Short on pages but long on decency." --Alta "His greatest strength--a quiet and profound elegance, an ability to write a simple phrase that seems to have been echoing through human consciousness for three or four thousand years." --Lewis MacAdams, California Magazine "Gary Snyder has maintained a bedrock sanity and art for the benefit of all our mutual lives, generously, specifically, constantly. If poetry means anything, and it does, his has made that point for all of us again and again and again." --Robert Creeley, author of Memory Gardens