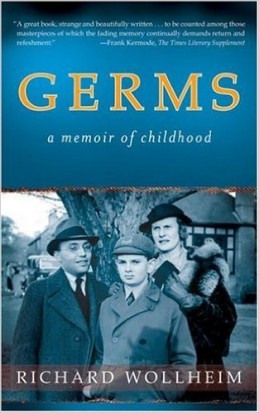 A Memoir of Childhood

Richard Wollheim grew up lonely and sad in London’s wealthy suburbs during the 1920s and 1930s, yet his was a childhood more interesting than most. He had an impresario father and a “Gaiety Girl” mother; together they attracted important guests (Diaghilev, Kurt Weill, Serge Lifar) to the grand houses and hotels that punctuated the landscape of Wollheim’s early years. Germs is his account of that time, of the years he spent adoring his charming but distant father; of his regret for loathing his beautiful, mindless mother. Told in prose that with hypnotic ease moves from deadpan comedy to poignant loneliness, Germs is already a classic work of memoir.

Richard Arthur Wollheim was a British philosopher noted for original work on mind and emotions, especially as related to the visual arts, specifically, painting. Wollheim served as the president of the British Society of Aesthetics from 1992 onwards until his death in 2003.