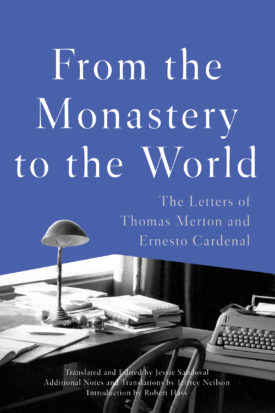 From the Monastery to the World

The Letters of Thomas Merton and Ernesto Cardenal

Thomas Merton and Ernesto Cardenal were both poets and priests, wholly committed to a life of spiritual contemplation which was never far from the gritty work that lead them to risk life and reputation in order to raise worldwide consciousness concerning issues of social justice and the abuse of human rights. From the Monastery to the World collects the complete correspondence between these spiritual men and dedicated activists, translated into English for the first time.

The letters in this book, written between Merton and Cardenal from 1959–1968, give us fascinating insights into the early spiritual and political awakenings of eventual Sandinista and exponent of liberation theology Ernesto Cardenal, who was then a novice leaving the Trappist Monastery in Kentucky where he first met Merton. While making the long trip home to Nicaragua to build a utopian artist’s commune on the Island of Solentiname, Cardenal rubs elbows with some of Latin America’s greatest writers and artists of that time.

In From the Monastery to the World, Cardenal is still a hungry pupil, years away from becoming the internationally renowned poet–statesman and Nicaraguan Minister of Culture. Here we see the poet and monk Thomas Merton as a wise, patient, and sometimes even humbled mentor, during the years when he was still shaping and collecting the raw materials for such writings as: “The Way of Chuang Tzu”, “Raids on the Unspeakable”, and “Conjectures of a Guilty Bystander”.

Merton and Cardenal’s correspondence grants readers an audience to conversations between two men deeply connected by their vigorous endeavors toward spiritual freedom, voracious intellectual appetites, and artistic exploration despite the cultural differences, language barriers, and geographic distances which divide them.

ERNESTO CARDENAL MARTINEZ (born January 20, 1925) is a Nicaraguan Catholic priest, poet, and politician. He is a Liberation Theologian and the founder of the primitivist art community in the Solentiname Islands, where he lived for more than ten years (1965-1977). A member of the Nicaraguan Sandinistas, a party he has since left, he was Nicaragua's minister of culture from 1979 to 1987.

A monk who lived in isolation for several years, and one of the most well-known Catholic writers of the twentieth century, THOMAS MERTON (1915-1968) was a prolific poet, religious writer, and essayist whose diversity of work has rendered a precise definition of his life and an estimation of the significance of his career difficult. Merton was a Trappist, a member of a Roman Catholic brotherhood known for its austere lifestyle and rule of silence in which almost all conversation is forbidden.

Praise
“Situated on the border between the First and the Third World, Cardenal and Merton think from the standpoint of the excluded, identify with victims of the colonial/imperial matrix of power, depict in their letters a world composed of multiple worlds. All in all, they offer us a glimmer of hope amidst the current spectacle of nationalist–separatist revivals. Through their letters Merton and Cardenal engage and transcend the deepest fears of the twenty–first century and point the way to a better future. In sum, From the Monastery to the World is both timely and wise.” —Malgorzata Poks, author of Multiculturalism, Multilingualism and the Self