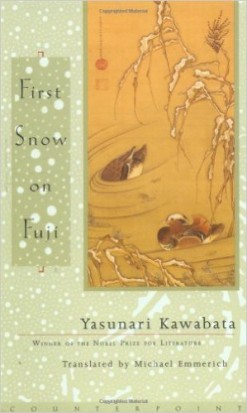 The stories of Yasunari Kawabata evoke an unmistakably Japanese atmosphere in their delicacy, understatement, and lyrical description. Like his later works, First Snow on Fuji is concerned with forms of presence and absence, with being, with memory and loss of memory, with not-knowing. Kawabata lets us slide into the lives of people who have been shattered by war, loss, and longing. These stories are beautiful and melancholy, filled with Kawabata’s unerring vision of human psychology. First Snow on Fuji was originally published in Japan in 1958, ten years before Kawabata received the Nobel Prize. Kawabata selected the stories for this collection himself, and the result is a stunning assembly of disparate moods and genres. This new edition is the first to be published in English.

Yasunari Kawabata was a Japanese novelist and short story writer whose spare, lyrical, subtly-shaded prose works won him the Nobel Prize for Literature in 1968.