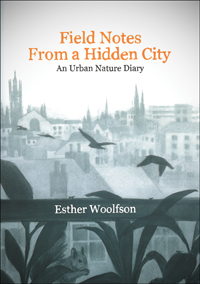 Field Notes from a Hidden City

Field Notes From a Hidden City is set against the background of the austere, grey and beautiful northeast Scottish city of Aberdeen. In it, Esther Woolfson examines the elements—geographic, atmospheric and environmental—which bring diverse life forms to live in close proximity in cities. Using the circumstances of her own life, house, garden and city, she writes of the animals who live among us: the birds—gulls, starlings, pigeons, sparrows and others—the rats and squirrels, the cetaceans, the spiders and the insects.

In beautiful, absorbing prose, Woolfson describes the seasons, the streets and the quiet places of her city over the course of a year, which begins with the exceptional cold and snow of 2010. Influenced by her own long experience of corvids, she considers prevailing attitudes towards the natural world, urban and non–urban wildlife, the values we place on the lives of individual species and the ways in which man and creature live together in cities.

Esther Woolfson was brought up in Glasgow and studied Chinese at the Hebrew University of Jerusalem and Edinburgh University. She is the author of Corvus: A Life with Birds, which is also published by Counterpoint. She has won prizes for her nature writing and received a Scottish Arts Council Travel Grant and a Writer's Bursary.

Praise
"Woolfson is an elegant, precise writer, and this transcendent memoir conveys exquisitely the vibrant world she inhabits."--Kirkus (Starred Review) "Through richly crafted prose she depicts the city and its inhabitants, both human and non-human, as they manage their lives and come to grips with natural elements and each other...Her sections on living with rats, the lives of slugs, and of herring gulls are joys to read, and she is both passionate and poetic when she turns her attention to the human species...Woolfson's careful observations bring to our attention elements of the natural world often taken for granted."--Publishers Weekly "Always tolerant and respectful, Woolfson offers both philosophical and scientific arguments for the conservation of all city life."-- Booklist