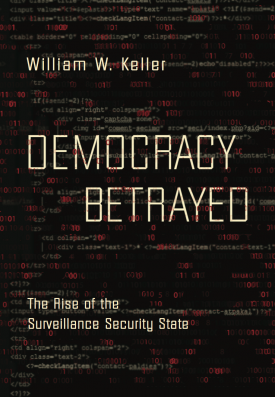 The Rise of the Surveillance Security State

In the aftermath of 9/11, in lockstep with booming technological advancements, a new and more authoritarian form of governance is upplanting liberal democracy. The creation of the Security Industrial Complex — an “internal security state–within–the–state” fueled by tech companies, private security firms, and the Intelligence Community to the tune of $120 billion a year — is intruding on civil liberties to an unprecedented extent. Politicians tolerate it; some citizens welcome it, thinking it may be the way to keep America safe in a time of uncertainty and terrorism. But how real is this threat, and is it worth the loss of our individual privacy?

As a society, we have yet to comprehend the meaning of universal digital interconnection, its impact on our psychology, and its transformation of our government and society. America is at a crossroads in contending with a security goliath; allowing the beginnings of a police state, and the conversion of our of our “liberal democracy” to a “secure democracy”— one where government overreaches, tramples on civil liberties, and harnesses great advancements in technology to spy on the populace. Keller walks us through what these changes can mean to our society and, more importantly, what we can do to halt our march toward intrusive and widespread surveillance.

An urgent wakeup call for a country in crisis, Democracy Betrayed is a timely and deeply important book about the future of America.

"Keller charts the growth of what he calls "Secure Democracy," a security state with the outward trappings of a free society but one that, since 9/11, has been ever more intrusive and manipulative, especially in the misrepresentation of facts concerning the dangers of terrorism...Keller makes a spirited case for preferring untrammeled freedom to managed and monitored safety."—Kirkus

“Many Americans believe that they are the beneficiaries, rather than the potential victims, of government surveillance. Those who have nothing to hide, goes the saying, have nothing to fear. In this important book, William Keller shows how naive this view is. The political philosopher Thomas Hobbes observed that the purpose of knowledge is power. And, having acquired vast knowledge about us, our government us in a position to exercise vast power over us.” —Benjamin Ginsberg, author of What Washington Gets Wrong and Professor of Political Science, Johns Hopkins University

“For many years now, William W. Keller has been one of the most talented and insightful writers on questions of security and liberty, beginning with his study in the 1980s on J. Edgar Hoover and the FBI. He continues on with this marvelous new work on the rise of Big Brother in the United States. Keller writes smoothly, researches exhaustively, and cares deeply about both the factual and normative dimensions of public policy. The result in Democracy Betrayed is a book worth reading from cover–to–cover, for within its pages reside reliable information on the elusive topic of national security, along with thoughtful prescriptions on how to fight against America's slide toward an ever intrusive surveillance society.” —Dr. Loch K. Johnson, author of A Season of Inquiry Revisited: The Church Committee Confronts America’s Spy Agencies