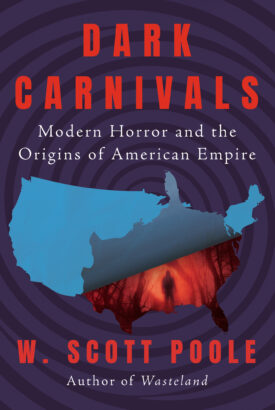 Modern Horror and the Origins of American Empire

The American empire emerged from the shadows of World War II. As the nation’s influence swept the globe with near impunity, a host of evil forces followed—from racism, exploitation, and military invasion to killer clowns, flying saucers, and monsters borne of a fear of the other. By viewing American imperial history through the prism of the horror genre, Dark Carnivals lays bare how the genre shaped us, distracted us, and gave form to a violence as American as apple pie.

A carnival ride that connects the mushroom clouds of 1945 to the beaches of Amity Island, Charles Manson to the massacre at My Lai, and John Wayne to John Wayne Gacy, the new book by acclaimed historian W. Scott Poole reveals how horror films and fictions have followed the course of America’s military and cultural empire and explores how the shadow of our national sins can take on the form of mass entertainment.

W. SCOTT POOLE is a professor of history at the College of Charleston who teaches and writes about horror and popular culture. He is the author most recently of Wasteland: The Great War and the Origins of Modern Horror, and his previous books include the award-winning Monsters in America and the biography Vampira: Dark Goddess of Horror. He is a Bram Stoker Award nominee for his critically acclaimed biography of H. P. Lovecraft, In the Mountains of Madness. He lives in Charleston, South Carolina.