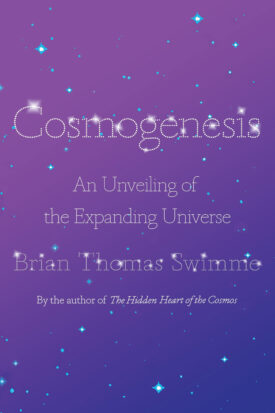 An Unveiling of the Expanding Universe

From the host and cocreator of PBS’s Journey of the Universe, a fresh look at how the rich collision between science and spirituality has influenced contemporary consciousness

The understanding that the universe has been expanding since its fiery beginning 14 billion years ago and has developed into stars, galaxies, life, and human consciousness is one of the most significant in human history. It is taught throughout the world and has become our common creation story for nearly every culture. In terms of the universe’s development, we humans are not only economic, religious, or political beings. At the most fundamental level, we are cosmological beings.

Cosmogenesis is one of the greatest discoveries in human history, and it continues to have a profound impact on humanity. And yet most science books do not explore the effects it has had on our individual minds. In Cosmogenesis, Brian Thomas Swimme narrates the same cosmological events that we agree are fact but offers a feature unlike all other writings on this topic. He tells the story of the universe while simultaneously telling the story of the storyteller. Swimme describes how the impact of this new story deconstructed his mind then reassembled it, offering us a glimpse into how cosmogenesis has transformed our understanding of both the universe and the evolution of human consciousness itself.

BRIAN THOMAS SWIMME is a professor at the California Institute of Integral Studies in San Francisco, where he teaches evolutionary cosmology to graduate students in the Philosophy, Cosmology, and Consciousness program. He is the cocreator and host of Emmy award–winning PBS documentary Journey of the Universe and coauthor of the companion book of the same title. He works with the Human Energy Project to produce the popular YouTube series The Story of the Noosphere. His other published works include The Universe Is a Green Dragon, The Universe Story written with Thomas Berry, and The Hidden Heart of the Cosmos.