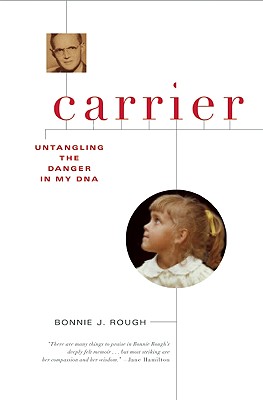 Untangling the Danger in My DNA

When Bonnie J. Rough receives the test results that confirm she is a carrier of the genetic condition hypohidrotic ectodermal dysplasia, or H.E.D., it propels her on a journey deep into her family’s past in the American West.

At first glance, H.E.D. seems only to be a superficial condition: a peculiar facial bone structure, sparse hair, few teeth, and an inability to sweat. But a closer look reveals the source of a lifetime of infections, breathing problems, and drug dependency for Bonnie’s grandfather Earl, who suffered from the disorder. After a boyhood as a small–town oddity and an adulthood fraught with disaster, Earl died penniless and alone at the age of 49. Bonnie’s mother was left with an inheritance that included not just the gene for H.E.D., but also the emotional pain that came from witnessing her father’s misery.

As Bonnie and her husband consider becoming parents themselves, their biological legacy haunts every decision. The availability of genetic testing gives them new choices to make, choices more excruciating than any previous generation could have imagined. Ultimately, Carrier is a story of a modern moral crisis, one that reveals the eternal tension between past and future.

Bonnie J. Rough holds an MFA from the University of Iowa. Currently a Bush Artist Fellow, she has taught at The Loft Literary Center and is also a trained birth doula. Her writing has appeared in The Sun, the Modern Love column of The New York Times, and elsewhere. She has traveled extensively and currently divides her time between Amsterdam and Washington State. This is her first book.

"What is so amazing about Rough's struggle with her DNA destiny is not just the impossibly tough choices she faces in planning her own future, but the raw courage she exhibits in dealing with the choices made by the generations before her. A carrier of the rare genetic condition hypohidrotic ectoderm dysphasia, which condemns sufferers to a lifetime of debilitating infections, chronic respiratory ailments, and recurring skin rashes, Rough reports that her grandfather and brother were scarred by the disease, leaving their wives, mothers, and daughters helpless and angry . . . This is a story that will resonate for anyone who grew up in a family with a relative suffering from a chronic illness or addiction." —Publishers Weekly (starred review)

"Rough a fine writer with a talent for portraying subtle family dynamics. When she writes as herself, she is often quite moving–particularly when she deals with the possibility of passing HED to her unborn child and her pain as she receives the fateful genetic–test results. An . . . engaging memoir that provides a much–needed window into how serious genetic conditions affect families." —Kirkus Reviews

"Rough's first–person account of carrying the gene for hypohidrotic ectodermal dysplasia includes monologues by her grandfather Earl, who died when she was a baby. His illness from the genetic disorder—characterized by sparse hair, cone–shaped teeth, inability to sweat, and distinctive facial features, including a deformed nose—is carried invisibly by mothers and passed to sons . . . Readers will be moved by her emotional pain, but equally affecting is Earl's . . . his is the haunting voice of the past that overshadows the present in this compelling read." —Booklist

"Bonnie Rough's search is a myth for our time, and her book a necessary read for anyone who faces the implacable destinies of inheritance." —Honor Moore, author of The Bishop's Daughter

"Bonnie Rough has crafted a memoir like no other: lyrical, investigative, haunting, and tender, all fueled by a powerful imagination and fiery intelligence unlike any other in the literary cosmos. Carrier is boundary–busting nonfiction at its finest. This is a book I will not only recommend widely but teach for years to come." —Robin Hemley, author of Do–Over!

"There are many things to praise in Bonnie Rough's deeply felt memoir, in her report from the brave new world, but most striking are her compassion and her wisdom as she navigates the harrowing choices, the complex choices that medical technology allows us." —Jane Hamilton, author of When Madeline Was Young