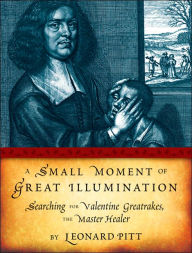 A Small Moment of Great Illumination

Renowned for his healing powers, Greatrakes stood at the center of one of the great controversies of his age involving scientists, theologians, physicians, and philosophers. Many proclaimed his cures a miracle. Others denounced him as a quack.
Recent court battles over intelligent design affirm that the conflict between science and religion still rages, but what was the debate like in its earliest flowering? A Small Moment of Great Illumination visits England at the height of the Scientific Revolution to find the answer embodied in Greatrakes. Claiming he could heal others simply by touching them, Greatrakes became the target for a rising contest between the clergy and laymen who would champion the emerging scientific theories of the day. This biography traces his ascendance in the high societies of England and Ireland and his relationships with poet Andrew Marvell, philosopher Henry More, and scientist Robert Boyle.
Pitt interlaces the biography with his own adventures, Pitt’s pursuit of the Irish healer turned up many magical discoveries. Including eye–witness accounts of Greatrakes’s healing and correspondence from Greatrakes on how he discovered his powers, this book pieces together the life and times of an enigmatic forgotten figure.