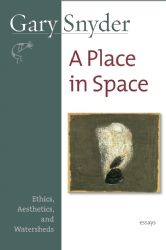 A Place in Space

In this classic collection of 29 pieces that span half a century, Gary Snyder explores humans’ complex, ever–evolving attitudes toward the environment. He argues that nature is not separate from humanity, but intrinsic to it, and that since societies are natural constructs, it’s imperative to go beyond racial, ethnic, and religious identities to find a shared concern for acts that benefit humans and nonhumans alike. Included in the collection is his 1971 environmental manifesto “Four Changes,” which, as he writes in a postscript, is unfortunately truer than ever. In this new edition, Snyder sends out a call–to–action that challenges all beings to take moral responsibility, a call that resounds with readers discovering the book for the first time or those returning to an old favorite.