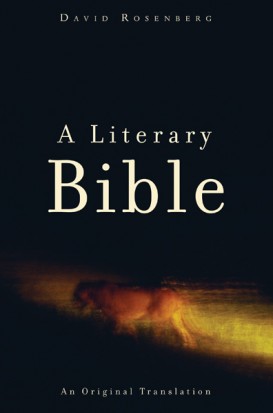 A stunning new translation—“the best in a century, without a doubt”—of the Hebrew Bible that restores the creativity and poetry of the original text (New Republic).

Whether rendering the Bible as wondrous or as strangely familiar, David Rosenberg’s “brilliant” and “truly fresh” translation forces us to ask again—and at last in literary terms—why the Bible remains a crucial foundation of our culture (Booklist).

Until today, translators have presented a homogeneous Bible in uniform style—even as the various books within it were written by different authors, in diverse genres and periods, stretching over many centuries. Now, Rosenbergs artful translation restores what has been left aside: the essence of imaginative creation in the Bible.

In A Literary Bible, Rosenberg presents for the first time a synthesis of the literary aspects of the Hebrew Bible—restoring a sense of the original authors and providing a literary revelation for the contemporary reader.

Rosenberg himself brings a finely tuned ear to the original text. His penetrating scholarship allows the reader to encounter inspired biblical prose and verse, and to experience each book as if it were written for our time.

Poet-scholar David Rosenberg is co-author of the New York Times bestseller, The Book of J (with Harold Bloom), and the former editor-in-chief of the Jewish Publication Society. A poet of Toronto Coach House, New York School, and Jerusalem Cricket lineage, he has published several volumes of poetry. A Literary Bible presents thirty years of his original translation from ancient Hebrew. His A Life in a Poem (Memoir of a Rebellious Bible Translator) was published in 2019.

"Part of Rosenberg's task was to produce a style of translation that might fairly represent a rocky magnificence . . . as if it belonged to a distinct individual . . . and on his own terms Rosenberg makes it work. Yet he expressly does not want his characters to speak a plain, familiar modern English like, for instance, that of the New English Bible . . . He is looking for modern readings, free of the muddles introduced into the understanding of these works by academics and religious commentators of all descriptions, and recognizable as living speech. He must somehow be modern as well as faithful to the past, reproducing where necessary the ancient, strange, "uncanny" vigor of J, the primary author . . . and to bear in mind ‘American poetry's struggle with natural speech.' On the whole it succeeds, and Rosenberg emerges with honor from his long wrestling match with an opponent who goes by the name of J."
—Frank Kermode, New York Times Book Review (Jan. 3, 2010)

"Rosenberg's new translation is as provocative and personal as ever . . . deeply poetic."
—Library Journal (starred review)

Praise for The Book of J

Praise for A Poet's Bible

"Rosenberg's translations from the Hebrew Bible are the best in the twentieth century without a doubt." —The Nation