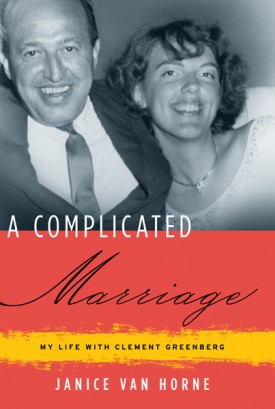 My Life with Clement Greenberg

In 1955, Jenny Van Horne was a 21-year-old, naive Bennington College graduate on her own for the first time in New York City when she met 46–year–old Clement Greenberg who, she is told, is “the most famous, the most important, art critic in the world” and soon finds herself swept into his world and the heady company of Hans Hofmann, Willem de Kooning, Franz Kline, David Smith, Helen Frankenthaler, among others. Seven months later, as a new bride, Jenny and Clem spend the summer in East Hampton near Jackson Pollock and Lee Krasner, and she feels even more keenly like an interloper in the inner circle of the art scene. A woman disowned by her anti–Semitic family for marrying a Jew, she would develop a deep, loving bond with Clem that would remain strong through years of an open marriage and separate residences.

Jenny embodies the pivotal changes of each passing decade as she searches for worlds of her own. She moves from the tradition of wife and mother to rebellion and experimentation; diving into psychoanalysis; the theater world of OOB and the Actors’ Studio; and succeeding in business. Throughout, A Complicated Marriage is grounded in honesty and the self–deprecating humor, grace, and appealing voice of its author.

In recent years Janice Van Horne edited two books assembled from Clement Greenberg's archive at the Getty Research Library; The Harold Letters and Homemade Esthetics, designated a New York Times book of the year. She lives in New York City, in the same apartment she and Clem moved into in 1960.

Praise
Praise for A Complicated Marriage

"Janice Van Horne's new memoir reveals a fresh perspective that sheds light on the interior life of Clement Greenberg, not only as the esteemed art critic but as a husband, lover, and off and on companion of nearly 40 years." —East Hampton Star


Praise for The Harold Letters

"Janice Van Horne has created a little treasure from these letters . . . original in every way." —Helen Frankenthaler, Partisan Review

"The Harold Letters distinguishes itself from other, more fallacious personal histories; his honesty unabashedly reveals the kind of unspeakable, grandiose desires that we all have for ourselves." —The New York Times Book Review

"In addition to chronicling Greenberg's zigzag journey to his true vocation, this fascinating volume also offers graphic snapshots of his busy life, vivid evocations of the urban American landscape, and what may be one of the best, most frank depictions of what it was like to be a struggling Jewish intellectual in the U.S. during the Great Depression." —Raphael Rubinstein, Art in America